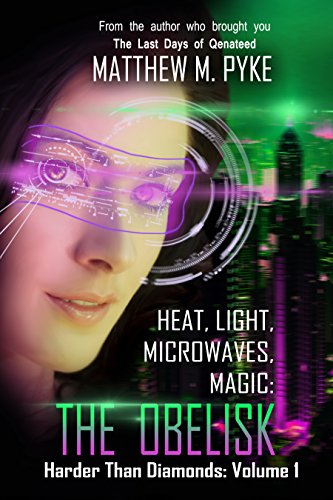 about this anthology: This book is a wild ride through the imagination. There is heart-pounding action, suspense, deep intrigue, vivid imagery, betrayal, love and fear. What would a transformed earth look like, where a family has to sneak to the stars? Or an ogre-like creature, with a taste for candy bars? Or strange lights in the sky that seem to move with malevolent intent, taking one man right to the edge. These are just some of the things you will discover in this highly textured anthology, where microwaves meet magic!

Heat, Light, Microwaves, Magic: The Obelisk has something for everybody, it's not just about science fiction, alien worlds, aliens, etc. Ordinary people being placed in extraordinary situations is a running theme in the book. Often times, those with the least training or experience are confronted with something that they have no choice but to deal with and accept. It is in these times we see what a person is made of. Heat, Light, Microwaves, Magic explores this, among other things.

Each story is written in a different style and voice, giving the reader a rich environment in which to explore. The characters are detailed enough to give the impression of a longer work, while action and vivid descriptions evoke strong mental images of the familiar and unfamiliar.

OK, besides the strange title, this is a very interesting book! It is an anthology, or collection of short stories, so for those liking single, long narratives, this book is not for you.

What you get: six short stories, mostly sci-fi, ranging from the everyday, to the distant future (two apparently not on earth).

The Encounter - awesome, suspense-building story of a man terrorized by UFO-like lights in southern Ohio. Crazy details at times. Like almost being there.

One Continuous Day - easily one of the strangest stories I've read. Without giving too much away, it basically is very Twilight Zone-y-ish.

Tatiana's Word - set in the distant, though not implausible future, where Earth is really a mess. Very cool descriptions (you'll know if you read it...their ship).

The Gunners Trade - a light romp in some weird plane, with an unusual leading character. Again, this writer has the ability to describe things in INSANE ways!

The Leaves of Evermore - bring more, please! A wickedly cool fantasy story, involving a sick boy, in a very odd world, with a quest to heal him. I would love to see this story expanded somehow. Sequel? Prequel(s)? How did this place come about? Where is it?

The Folders of Time - a short story that spans the globe (best way to describe it). Conspiracy theory runs like a river through it, and the prose reads like a sports car. The ending is VERY confusing. My head hurts trying to think about it.

Well, that's pretty much it. Hopefully the author will release more books in the future! [by Will]