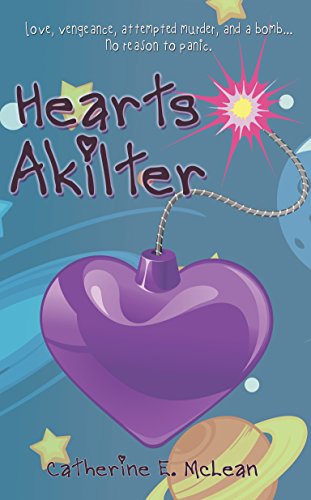 about this book: Hearts Akilter is a lighthearted fantasy/sci-fi tale about his heart, her heart, and a robot's nonexistent heart.

I have always been fascinated by robots and mechanical things, then one day the question hit me: What if a robot thought it was having a heart attack? Well, robots don't have hearts, so they can't have heart attacks. But what would cause such a malfunction? The best person to determine the malfunction— Marlee, a robotics technician, who discovers the problem is a bomb. Realizing who may have put that device into the robot, and not wanting that person to find out she knows about the bomb, Marlee decides to kidnap a bomb expert, Deacon Black, and have him disarm the bomb.

Only Deacon has a problem of his own— someone is trying to kill him. When he sets a trap to catch his assassin, he nabs Marlee instead. He's smitten by her gutsy forthrightness. So, can Marlee and Deacon discover who the bomb was meant to kill and prevent the bomber detonating the device?

And, for Deacon and Marlee, love just might be a more explosive force than any bomb.