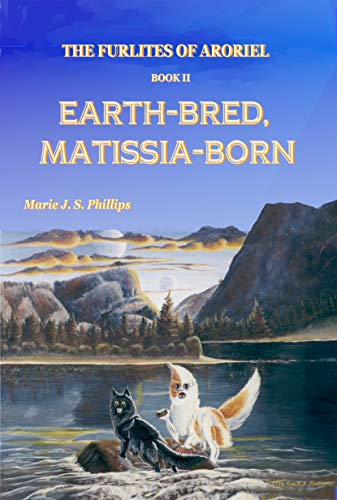 about this book: This book, THE FURLITES OF ARORIEL: BOOK II– EARTH-BRED, MATISSIA-BORN the second book in my THE FURLITES OF ARORIEL series, continues the adventures of Clan Darius, and shows the action through members of the family, primarily Ship Commander Geupetus and his daughter, Murkuria. Young Murkuria discovers that the homeworld-bound Sunpyne harbors yet another stowaway. This time, it is the Human's lost pet Maine Coon cat, which is pregnant and dying from malnutrition. Murkuria succeeds in genetically altering the Earth cat's unborn zygotes so they can thrive on Aroriel's magnesium-rich foods.

Seven enormous kittens -- born to surrogate mother Iggie the Matissia -- bond to and communicate telepathically with Furlites of their own choosing. These exotic smart treasures which Murkuria dubs Felakoons, endear themselves to the proud Clan, proving to be far more than mere pets. Murkuria is ecstatic that she saved the kits, and one of then calms her annoyed father by bonding to him, showing him what his daughter already knows.

However, as the Sunpyne and Sauri return from their first mission to the stars, the Clan anticipates awe, triumph, and glory, but unexpected opposition to the new "alien" life throws the planet into strife and conflict such has not been seen in centuries. Murkuria is outraged, and shocked by this, and worries if her Felakoons can earn a place in Furlitian society, or be sterilized, to die out as a species before they ever have a chance to prove their worth to the dissenters.

I finished the book in about a decade, because it took that long to flesh out the characters of the new lifeform, and they play major roles in the story. I researched further on cat color genetics, and other aspects of bringing this new life to the Furlite's home world. The glossary in this book is more extensive than the first and includes information about the Felakoons, as well as more about Furlitian society and culture.

The title came to me easily, since the new lifeforms, the Felakoons, are of earthly stock, but genetically altered to survive on Aroriel, and Iggie is their surrogate dam.

This story does have sexual content so I would not advise this for very young readers under sixteen or so years of age.

I created this cover since it shows two secondary characters in one of the scenes in the book. I created the cover with a free hand acrylic painting of the scene. The illustrations in the book and in the extensive glossary are all a mix of hand drawn characters and computer enhanced artwork. This book also took many long years of research, organization and world building to bring it to life. The basic science must be sound in any science fiction book, even if it mixes elements of fantasy.

I learned from writing this book and several others, that it is almost impossible to get a traditional publisher to even notice a new author. I am not truly new, since I have written stories since grade school, but if publishers do not know you or your agent well, all you see are rejection slips, enough to wall paper two rooms.