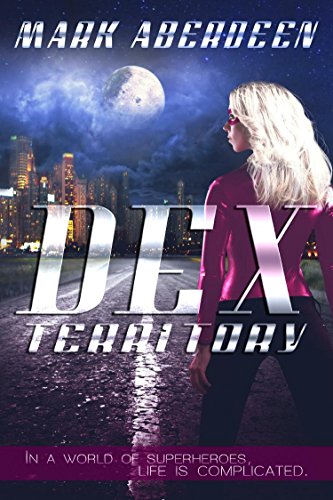 about this book: Rick O'Shea has a tough life. He's a police detective operating in a world filled with super-powered people. He's on the trail of a super-powered serial killer known as the Reaper when he gets a call; there's open warfare in the streets. It looks like a simple robbery gone bad, but there's something unusual as new super-powered people called Dexes have shown up at the party. It was impossible. The retrovirus that created the new world ran its course twenty years prior and couldn't be duplicated. Rick is caught in the middle as he and the members of New London's STF, Super-Human Task Force, are pinned down in middle of ground zero. The public is furious, the destruction is untold and Rick, with the help of the STF and some remarkable friends: Martin, a private investigator with a secret. Pink Panther, a superhero that only wants to help and maybe help herself to Rick. Thunderstorm, a thunder god who'd rather live and ordinary life. Doc Quarks a genius with new and often exciting relationship with the fundamental forces of the universe. Rick must figure out what sparked the riot, where the new Dexes came from, stop a serial killer from sparking a drug war and stay alive long enough to fix the disaster that's his love life.

• Terri - This book had me from page one, Every time I put it down I could only think about when I could pick it up again.

• Innzane - This author takes you into his world from the first page, I just couldn't put it down. If I were to see this as a pilot for a tv series, I'd be setting up my DVR now.

• Rebecca G - The author draws from current technology which provides a fresh feeling to the book. The story draws you in.

The book has been a love of mine for a long time. I'm so happy that I can bring these characters out in the world and have amazing adventures with them. Rick is a cop, hopelessly outclassed, often beat up and bloody, but he doesn't know how to quit and he knew where to be to do the absolute most damage. He's surrounded by a host of characters that hinder him as much as they help him. The book takes all the superhero tropes and bends them sideways. I injected some hardboiled snark in the book and some twists and turns that should keep the gentle reader guessing until the very end. Most of all I tried to make something fun for the reader. This is the first in a series and it starts off with a bang that will have repercussions for a long time.