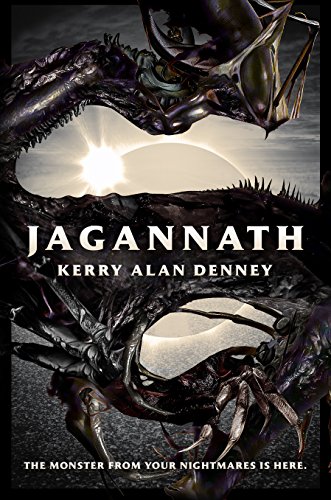 about this book: Jagannath [júggə naát]: a Hindu deity, literally "lord and master of the world and universe." Origin of "juggernaut," a relentlessly destructive, crushing, and pitiless force.

The monster from your nightmares is here. It's destroying civilization. Soon the human race will be extinct.

2021: An amorphous creature rises from the depths of Earth's oceans in search of new food, acquires a ravenous appetite for human flesh and blood, and begins annihilating humankind, growing as it feeds. By absorbing its new prey's minds, the creature assimilates human intelligence and becomes self-aware. Able to metamorphose into any life form it absorbs, it discovers a merciless delight in tormenting its victims, and transforms into combinations of any creatures humans have ever known or even imagined — especially serpents, beasts with razor-sharp talons and fangs, and monsters straight out of humanity's darkest nightmares.

2037: Survivors of the creature's global rampage call it the Reaper. Insatiably hungry, it has nearly destroyed modern civilization. Humans unite with two common goals: survival, and dominion over the Reaper. It becomes sluggish and dormant when exposed to extreme cold, and most survivors flee to the coldest regions to avoid it. Those who remain in Reaper-infested territories to fight the creature build the Enclaves.

All technology is used to ensure the survival of the human race. With the fall of cities comes the inevitable fires, and the discovery that the Reaper burns with them. Flamethrowers and a liquid gel that crystallizes the creature's sludgy flesh become the ultimate weapons, and the only ones that can destroy the Reaper.

Corporal Kimi Jayden and her unit of Renegade soldiers from the Appalachian Mountains Enclave find Lily, a twelve-year-old girl who is immune to Reaper absorption, surviving alone in the dead city of Savannah. Their mission: bring Lily back to the Enclave, and use her DNA to destroy the Reaper. When they rescue Lily, Kimi realizes her destiny: she must protect Lily, no matter what the cost. Humanity's survival depends on her success. But the Reaper covets Lily, and takes her.

Kimi and the Renegades battle a ghastly horde of Reaper incarnations while trying to rescue Lily. Lily escapes from the Reaper, but a group of refugees led by a ruthless man named Cooper kidnaps her. Cooper wants to steal Lily's immunity to avoid absorption. Dogs can sniff out humans infected by Reaper molecules, and Cooper keeps a skittish Labrador Retriever named Spook, whom he abuses, for that purpose. Lily befriends Spook, and they become inseparable partners as they discover together the true meaning of courage.

Kimi is separated from her unit, and infected by the Reaper. But she's also infected by Lily's blood, and before the Reaper's molecules destroy her mind and control her body, the combination effects a miraculous change: Kimi becomes immune to absorption, and infused with a tireless stamina and an ability to rapidly heal from mortal wounds. Kimi reunites with her commander Lieutenant Derek Raines, and deliberately infects him with the magic flowing through her veins, with the same miraculous results. Kimi and Derek rescue Lily and Spook in a series of bloody battles not only against Cooper's gang, but also against what Lily calls Reaper zombies, a horde of altered humans the creature infected. Together the triumphant quartet returns to the Enclave.

But the Reaper has discovered a terrible secret: By gathering its composite components together, it becomes so colossal and powerful it can infiltrate the Enclaves. Searching for Lily, it breaches the ice moat surrounding Kimi's Enclave. Kimi, Derek, Lily, and the Renegades battle the Reaper in a deadly surreal showdown, and discover they're not just fighting for their lives — they're fighting for the future of humankind.

New York Times bestselling author JAMES ROLLINS says, "Kerry Alan Denney's JAGANNATH has everything I love in an action novel: great characters, strange otherworldly monsters, and one spunky four-legged hero. If you want a story that holds you in its grip from page one to the final line, pick up this book!"