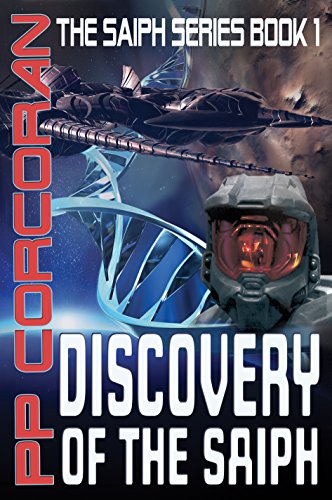 Book: Discovery of the Saiph (The Saiph Series Book 1) by PP Corcoran

about this book: Discovery of the Saiph is about man's sudden ability to explore space at will and during these explorations they find a secret database buried deep in an alien world. This leads to the realisation that in the distant past an alien benefactor assured his prominence in the Darwinian chain of life.

I wrote this book with the idea that I wanted to offer a radically different view to the Johnny Appleseed theory of evolution. I was inspired after years of reading science fiction with which I was becoming jaded, I thought I could write something a bit different. I chose the course of an ensemble cast mixed with high action and, of course, technology it should appeal to military sci fi and space opera fans.

It took me nearly two years to write. I'd never written a book before and had no idea how hard it actually was to put my thoughts into written words. I also knew I wasn't able to put my whole story into one book so I broke it into scenes, the first book covered the discovery of the alien species called the Saiph – so I settled on the title of Discovery of the Saiph – it seemed pretty apt.

Now the cover… wow! I tried a few and finally got one that I think gives readers an idea of what they are getting, it shows the naval and marine influence of the story line and to me seemed the best fit.

Through all of this I've been holding down a full time job working shifts, it's a nightmare as I'm often too tired to write, it's also one of the reasons it took me so long to write the sequel to Discovery of the Saiph. Having said that I love writing and I even love the research I 'need' to do. I have to admit I'm a geek, I love science fact as much as science fiction and have tried to incorporate some of these facts into my fiction, for example the science of the 'fold' system in the gravity drive, the alcubierre drive and the different weapons systems such as plasma rifles and PEP pistols which are based on real technology.

Along the way I learned that my readers are very astute, no wool over their eyes! I had to invest in time to get my science right and my plot consistent throughout, otherwise be prepared for criticism!

To my readers I say:

Thank you for buying my book, thank you for taking the time to write wonderful reviews and I hope that you will enjoy my future books.

It is my goal to become a full time writer and I'm almost there, I wouldn't be anywhere without my readers the vast majority of which have been very encouraging and supportive.

Please keep in contact with me, I'm open to ideas, questions (and criticism – constructive of course!) you can get me at the usual hangouts and I'm not hard to find search 'ppcorcoran'.

Oh and my last word, some reviewers have remarked on whether PP Corcoran is my real name – it is! Paul P (you'll have to guess) Corcoran.

Video: Discovery of the Saiph