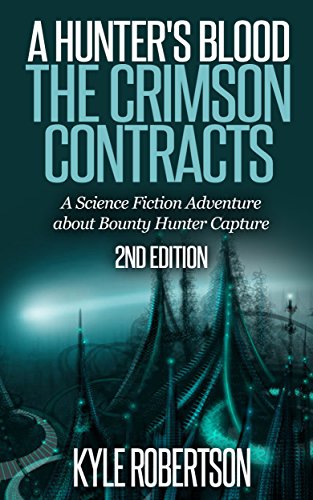 Book: A Hunter's Blood - The Crimson Contracts (The Hunter Chronicles) by Kyle Robertson

about this book: In this futuristic allegory of a thrilling explosion into a genetic experiment turned drastically wrong, a bounty hunter is caught up in life threatening danger.

In the year 3041, law enforcement has been drastically change from police being the standard custodians to bounty hunters being at the top. The police handled misdemeanor citations while the Hunters dealt with the more extreme violators of law.

The corporation Dyna-Techor created the ultimate pinnacle humanoid that turned on their scientists creators by murdering them, and became fugitives. Dyna-Techor wanted their prodigal creations back.

They contracted the Hunter's Guild to retrieve them. Drakx Slazakohn was the most experienced, hard boiled Hunter in the department that only brought back every contract the terminal way.

The experiments were called the DNAccidents, and totaled seven. After killing six of the males, he was surprised they created a female for the last. Her name was Sensus.

The female was vastly different from all the men. She was enhanced while they were not. Drakx found out about her enhancements when she killed, and reanimated him six times to bring back the men. She killed him a seventh time for her satisfaction. Afte his death, things became interesting.

Drakx was a loyal employee for the guild for years. After his termination, he had to become loyal to a higher power to retrieve the male essences, and restore balance.

His reward was a new life, but if he failed he would feel the pain of dying for an eternity.

Along with a unique woman that was thrust into his existence, and began to help him bring back the killers, Drakx goes through life changing wildness having to deal with the DNAccidents.

Find out if he can bring them back or suffer the eternal pain of dying in A Hunter's Blood: The Crimson Contracts.