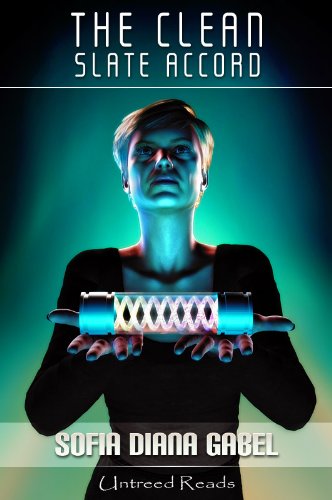 Book: The Clean Slate Accord by Sofia Diana Gabel

about this book: The Clean Slate Accord is a science fiction novella that whisks the reader into the near future where the world is governed by a single woman, Alexa Lange, the Global Director. Alexa is ultra-intelligent and takes her position seriously. Has has worked her entire life to bring about peace. Tired of wars and violent conflicts, she works side by side with her assistant, the eerily precocious Jonas, to develop and set in motion a plan to create her perfect non-violent world. Jonas, an innocent child with an intellect that revials Alexa's, craves normalcy and friends, but his intelligence and quirkyness makes him an outcast. Many of the planet's countries have merged and all have agreed to the Clean Slate Accord, Alexa's grand scheme to eliminate every violent thought throughout the population. The Clean Slate Accord uses neural implants that curtail certain thoughts so the people simply will not have thoughts that will lead to conflict and violence. Once the Clean Slate Accord is enacted, however, a problem arises, one that could bring Alexa's dreams to a crashing halt.