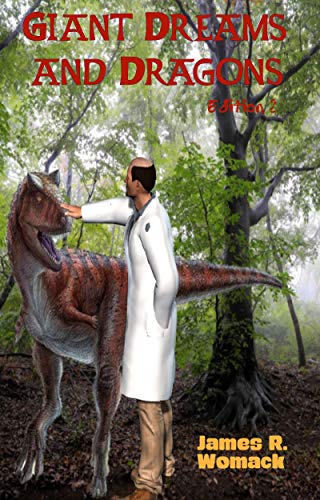 about this book: Professor Buford Doss, never got the respect or credit he deserved. Such prestige went to what he insisted were inferior peers and even mentally dense graduate assistants. But Professor Doss had a plan to remedy all of that. A big plan. A miraculous plan. And he was anxious to set it in motion, even if it meant engaging in a bit of deceit. You may say he had no intention of 'dragon' his feet on the matter. No siree. Not Dr. Buford Doss.

"Michael who?"
"Michael Crichton."
"Who's that?"
"You have to know, he wrote The Andromeda Strain."
"I saw that movie."
"He also wrote Lost World."
"No, he didn't that was Arthur Conan Doyle. The Sherlock Homes writer"
"And Michael Crichton, he wrote a book of the same title."
"Well, I really liked the TV show."

Basically, this shows all I knew about Michael Crichton back in the late 1980's when I first began writing Giant Dreams and Dragons. I had just recently discovered text manipulation courtesy of a Tandy computer and graduated from Deskmate to Professional Write, then got introduced to WordPerfect 4.2. So you'd be correct in saying I wrote this story, the original version that is, so I could experiment with the newfangled technology of the day. Namely the personal computer and word processors.

So how did I come up with a dinosaur tale? I think it had something to do with either a "National Geographic Magazine" or a "Smithsonian Magazine" I found in a pile of magazines at a library. It had an article discussing dinosaurs as being warm-blooded. For whatever reason, the article rattled and bounced around in my head for some time. Somehow it got stirred, shaken and mixed with ingredients such as my love for backpacking and stuff that was going on in my life back then. The concoction got brain baked into a vivid dream that brought me awake and had me writing the first version on Professional Write at 3:00 AM. Later rewritten in WordPerfect. A few years later, for personal development and lifelong learning purposes, I took a creative writing class at the local community college. Imagine my surprise when the instructor brought to my attention that my submitted story was Crichton-esque as she phrased it. She then introduced me to the book Jurassic Park. Of course I saw the movie when it came out. But Giant Dreams and Dragons is my dream, appearing here now a bit more refined than when I first wrote it. At least I hope so. And it's a fun read.