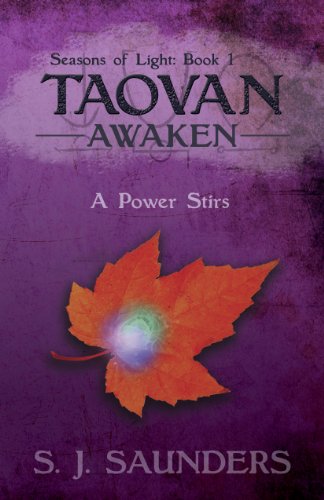 about this book: The title for Taovan (taʊ væn) gestated for a long time, and it was something that caused me a large amount of anxiety. In a market of snappy or eloquent titles that fully encapsulate the nature of their innards in every language, why make up your own?

Well, I'll tell you. I'm stubborn. Over the years of Taovan's formation, dozens of titles tried to attach themselves, and, inevitably, each of them failed to stick. Everything was too generic, too ambiguous, or even too pretentious (if some of you feel that Taovan still hits one or all of those points, I apologize.)

Things began coming into focus when I decided on the series title, Seasons of Light, and that I would add a subtitle for some degree of clarification. I then started rifling through the alphabet I'd constructed (with the help of my absurdly outstanding wife) for the people of my world and their budding language. Sounds in their words are simple, and often with only slight variances, having been derived in conjunction with their first form of writing, pictographs, before the onset of printed communication and the need for a more uniform written language.

*crickets chirping* Anyway, now that I could have an Atalan word sandwiched between spurts of English, all that was left was to determine what word from the simplistic Greek/Latin hybrid I had commandeered for the common tongue would best describe the events of the first book in my series. It wasn't long before I settled on "Awaken," the generic-ness of the word in the genre hopefully to be offset by the main title before it.

So now we have Seasons of Light: Book 1, Taovan: Awaken as the full title. Yeah, so maybe it's not entirely un-ambiguous, but I like it. If you still have no idea what the book is about, there's the tag line and the synopsis on the back. With any luck, the cover's been enough to intrigue you that far.

And, if not, I can just tell you here. It's a Joseph Campbell-esque heroic epic with fantasy and sci-fi elements and a touch satire…and a weird title.