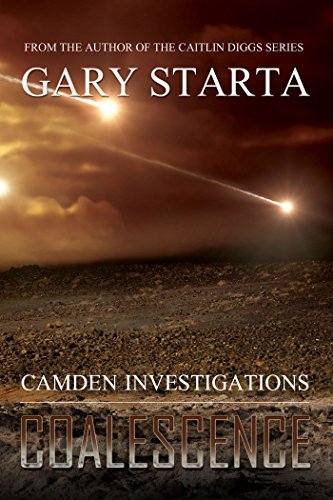 about this book: In January 2015, The Twilight Recorder interviewed the lead investigators of two major paranormal research groups: Iris Camden of the Colorado Ghost Hunters, and a man who only would like us to identify him as 'Mitchell' from the Colorado Eyes in the Skies.

Skeptics and believers both, I thought listeners might find it interesting to find such a division in beliefs as evidenced in the following transcript. As both Iris and Mitchell investigate the unknown, they both rather have strong opinions on ghosts and aliens. Iris believes in ghosts, Mitchell in aliens. So, the more interesting aspect of my interview will be to get both to divulge their skepticism respectively. Ultimately, you will be the judge if paranormal investigators residing on different ends of a spectrum can make each other stronger in the quest to shed the fiction from fact and determine if we are really 'not alone' in both the universe and the spiritual realm. Unfortunately, the interview gets cuts short. It's indeterminable if it's a malfunction or a paranormal manifestation that interferes. Again, I'll let you be the judge.

Interviewer Tim Cage: Good Evening, Mitch and Iris. I'm finding it hard to pick which of you to go first. But let's make it Iris, what made you find ghosts so fascinating?

Iris: Ghosts kind of found me fascinating, I guess. I have a psychic sense, and I can sense they are out there. But I'm not a medium like my sister, DJ, who can actually speak with the dead.

TC: Mitch, you look like you're going to burst. What's on your mind about this topic?

Mitch: I'm just wondering if Iris can substantiate how her sister 'talks' to the dead. Without an audio representation, which would still be subject to scrutiny, how do you know who she is talking to isn't really alive?

Iris: Grunts. So you think I'm making this up? She shakes her head. My sister is talking to my dead stepmom, Mitch. We know it's Mom; no one else could pretend to be that annoying. I must admit I'm not really close to her and that's why she is probably attracted to DJ. But, just to let you and the audience know, it's not even DJ's choosing. The girl is freaked out by her mother's death and each visit just reminds her of an untimely passing. She is becoming a recluse and I'm worried about her. Actually, I wish I could just tell my stepmom to stop!

TC: This is an interesting take on a paranormal relationship. I'm wondering if the blood relation is making the afterlife connection possible. I mean, Iris, you would think your stepmom might find a way to communicate with you.

Mitch: Scrubbing at his chin. That's a fascinating take, Tim. If what you posit is true why doesn't every one of our parents come back and 'annoy' us in the fashion DJ's mother is said to be capable of. I'm wondering if DJ is so scarred by the death, the 'haunting' is in her imagination. Perhaps, it's guilt revisiting her. If so, I would think DJ might be better served by a counselor who might make the guilt tenable. Perhaps, she needs the guilt to disappear more than her 'visiting mother'.

Mitch: Rubs his hands together. Of course! You're absolutely right…I believe in UFO's – meaning 'unidentified' objects. They could very well be earth based ships, but what I find untenable is the government's complete denial of the sighting itself. I don't think every ship in the sky is from another planet but I do think that some of 'our' ships were reverse engineered from confiscated alien technology. How else do you explain the rapid advances of technology since the 1960's? Why were we just learning to make an automobile and develop a photograph some 50 years or so prior? Who gave us the edge, and more importantly, why?

TC: Mitch you've stated your case very well. So, Iris, do you believe every apparition or specter is a ghost?

Iris: I never made the claim that I do. I head an investigative team where it's very important to rule out what things 'aren't' are. My dear friend, a former lead investigator who I won't name out of respect, came upon something even I can't classify to do this day. But it did its damage to him. It disabled him. It's my duty as the lead investigator to direct my team in the proper direction and get in the face of danger if necessary. We are not talking about fantasy or delusions in most cases. I can't tell you if the entity was a ghost or even a person. But it was damaging…

Mitch: Ah! So, you've just admitted that even when you think you are classifying a ghost, you might be experiencing another entity, something not of our known world…

TC: Okay, you two are sparring pretty well. So, Mitch, what are you getting at?

Mitch: What if an inter-dimensional being were to appear to us? It might be slightly out of phase with our world. What most think of as apparitions of former living persons might just be aliens in disguise. It may be capable of appearing to us in a form we can understand. So, even if you can prove a shadowy being beyond doubt on an EVP, what if it's impersonating a human?

Iris: Takes off her spectacles and cleans them with her shirt. Mitch, what reason would an alien have to do such trickery? And are seriously suggesting an alien is impersonating my annoying but loving, stepmom?

Mitch: I think the very nature of an alien encounter would be unclassifiable. I mean, you've got me, Iris. I don't know how I can prove it because it's an entity not previously 'officially' categorized. It would break the mold, at least if you believe the government's story that a weather balloon crashed in Roswell in 1947. So, we start from scratch. But we don't always jump to the ghost conclusion, either.

Iris: This is your idea of being fair? Huh. Well, I can't find the motivation for an alien to target my lonely stepsister DJ. The only consequence would be cruelty. I can agree that the entity which harmed my friend was not your typical specter. It certainly wasn't just residual energy, meaning it could react. And its reaction was terrifying.

TC: And do you have any record of this entity?

Iris: It did it's best to wipe my memory, Tim.

Mitch: So, if it did that, what even makes you think you experienced something formerly alive, and not an entity fully alive, aware, and possibly from another realm of our universe…? Or, possibly a hallucination….

Iris: It was a red ball for god's sake.

Mitch: Red, and not orange…?

Mitch: There are orange balls of light known as OBOL's they are thought to precede UFO sightings. They are even thought to forge the distinct geometrical shapes known as crop circles. Just wondering…

Iris: Come now! We have two old men admitting to this forgery.

Mitch: If you think two old drunken men were capable of crafting such magnificence with a wooden board in the dead of night, than you are…

TC: What was that? Ladies and gentleman, we may be losing our broadcast signal. It appears our lights have just flickered on and off. Is this a technical malfunction? I'd have to ask my engineer. But with the very nature of our conversation this evening, do either one of you think…

Iris: The problem is we cannot think or even theorize without facts and evidence. So, you see not every bump in the night is a ghost to me. Nor, is it a deceased and annoying relative waiting in hiding…

Mitch: Perhaps I'm such a loner that ghosts don't think to visit me. But for this light flickering, I cannot hazard a guess. It would be speculation. And Iris, you have my respect as an investigator. I just wanted to see if I could rattle your cage tonight…

At this point in the interview, I hear a tinkering sound but it's never found on the tape by my engineer who hears it as well. Is it the entity which harmed Iris' friend, or, is it an alien entity giving us an answer as to its existence…?
Several hours later, a crop circle appears in the City of Cherry Hills Village…

This reporter dares not speculate further. The interview you've read was fully recorded but without the tinkering clinking sounds at the interviews end. Dare I posit that a noise made in another dimension might not be recordable in ours?

Three months later: A strange light show resembling the aurora borealis haunts the legendary Chaco Canyon area. Investigators Mitch and Iris claim they made contact with something but for the safety and good of the populace they are adamant they cannot make any statements. And I find it very odd that two people who are both committed to revealing their separate truths seem to uphold disclosure, something which has left a bad taste in the paranormal community's mouth for decades. I must know what frightened them in Chaco Canyon. I pledge to make an effort to get Iris and Mitch back on my show in the near future. This is Tim Cage saying goodnight and make sure to keep the porch light on.