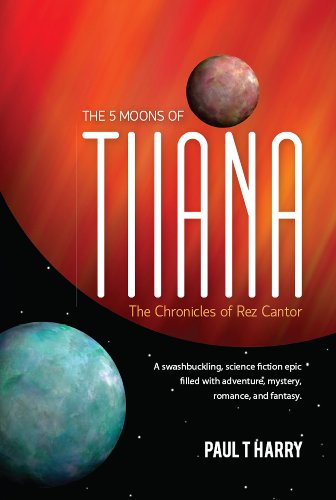 Book: The 5 Moons of Tiiana - The Chronicles of Rez Cantor by Paul T. Harry

about this book: The 5 Moons of Tiiana is a science fiction novel about a soldier caught in the middle of an interstellar war, faced with rescuing the princess he loves, and solving a 2000 year old mystery that just might yield the secret to bringing peace to both sides of the galaxy.

Rez Cantor is a captain in the Imperial Army, and the personal attacheʹto Leanna, the sixteen-year-old daughter of the Emperor, and the sole heir to the Melelan throne.

On the eve of what is supposed to be a treaty signing ending a twelve year war between the alien-hybrid Relcor and the Empire, Rez Cantor learns that the Imperial family has been slated for death. Under orders from his Queen, Rez is given a final command–save the Princess at all costs.

Not to be stymied, Rez kidnaps Leanna and the two flee Melela along with others of the Imperial guard. Unfortunately, their ship is nuked as it enters warp, creating an event horizon that sends the ship 128,000 light years across the galaxy to the Moons of Tiiana.

It is on one of these moons that Rez awakens on a beach–alone–without the princess.

So begins the sojourn of Rez Cantor upon the Moons of Tiiana: Five moons stagnating from a 2000 year old war that has left its races in limbo and decay. Five moons that crave a hero bold enough to lead its people out of the darkness. Five moons that hold the future of the Melelan Empire deep within the ashes of war.