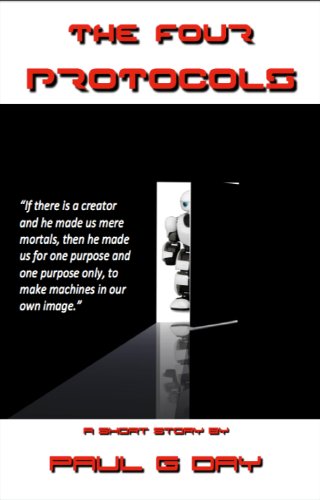 about this book: A robot is given a final instruction and then struggles to properly interpret and then act on the command. Robbie is faced with an extraordinary decision, which will lead to an incredibly horrific event. This story examines the question Asimov raised in books such as I Robot.

Being a home security robot, Robbie is programmed around four essential protocols. These protocols are progressively serious, dependent on the circumstances and context of danger. Before they leave on their vacation, the family gives Robbie his last order. "Under no circumstances are you to let anyone in." The restrictive terms in the command start to confuse the robot as he sets about interpreting the motives of an intruder, in the light of that last instruction. Then, complicating matters, Robbie appears to have strange dreams which make no sense until his last moment of inspired action.

Humans operate on intuition and can adjust decisions to match any and every eventuality. Machines require input from humans in the form of coded commands and cannot interpret the environment in the same way. Machines operate on simple logic. But when simple logic is mixed with an awakening sense of self, the problems could be catastrophic.