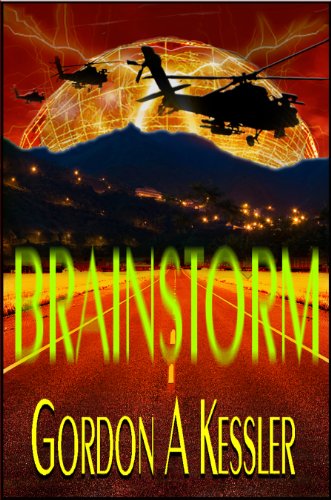 about this book: Have you ever had déjà vu moments? They seem so real, but they can't be, right? Are they premonitions or are they memories of past lives? Could it be that you're not who you think you are? Could what you think are fond memories actually be implanted?

In Brainstorm, Robert Weller awakens in a world that he thinks he knows intimately. His lovely wife, his paraplegic son, his neighbors and friends, and even the picturesque mountain town in which he lives all seem nearly perfect.

But something goes terribly wrong in his nearly storybook life, and by midday, Robert finds he's being hunted by paramilitary units and the people he thought he knew and loved have either dropped dead at his feet or are trying to kill him, as well.

Brainstorm: Do you know who you really are?

• James Rollins, NY Times bestselling author of the action thrillers Map of Bones, Black Order, The Doomsday Key and many more, says: "Gordon A. Kessler's BRAINSTORM is a wild ride into the reality of human consciousness, forcing us to question who we are and our place in the universe. It's also a kick-ass adventure story that will have you thrumming through the pages well into the night.

• Douglas Preston, NY Times bestselling author of the thrillers Relic, The Codex, Book of the Dead and many more, says: "BRAINSTORM is as exciting and fast-paced as a thrill ride on a dive bomber, a maelstrom of action, violence, murder and mayhem, way too much fun to put down once you're hooked. It is also frighteningly believable, based on an actual black CIA program known as 'Project Stargate.' Kessler is a former US Marine parachutist, recon scout, and 'Super Squad' team leader--and he really knows his stuff. An outstanding novel."