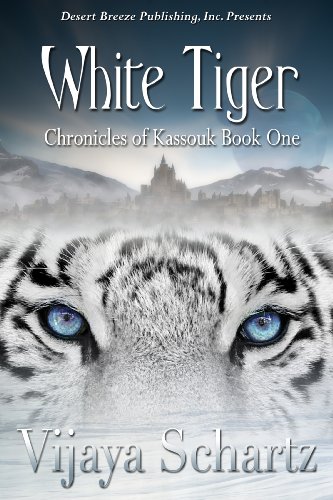 Book: The Chronicles of Kassouk Book One - White Tiger by Vijaya Schartz

about this book: Named White Tiger because she learned to fight among tigers, Tora is no ordinary woman, even on this planet where humans have developed a new civilization after having lost everything in a crash. But that's the legend. The reality is that humans, in their medieval state of development, are subtly oppressed. An advanced galactic race from the planet Godda uses technology to be worshiped in the temple as gods.

When Tora's father is killed under suspicious circumstances, she sets out to avenge his death. But the savages of the fringe attack, and the satellite regulating the weather explodes.

As the planet returns to its frozen state, Tora goes to war. But what she meets on the frozen plains of Kassouk is an unexpected ally. The impossibly handsome Dragomir is neither human nor Goddian. He is a hybrid of legends. And fraternizing with this legendary being is punishable by death. Both Tora and Dragomir know the risks.

But the planet is in great danger from a deadly invader, and only they can save it. Destiny, love, action, adventure, battle scenes, love scenes, and a very cool world created by the author for this series.

Oh, WHITE TIGER is an award-winning book, so don't miss it.

• "...an exceptional tale that belongs in a place of honor on keeper shelves everywhere." — Coffee Time Romance - 5-cups rating

• "...this is one futuristic that you do not want to miss!" — Fallen Angels Reviews - 5 angels - Recommended Read

• "...kept me enthralled from the first page...a thrilling science fiction romance" Paranormal Romance Reviews
• "I'm adding this to my "keeper" shelf and on the "to be re-read" list because as with other favorite reads, I'll get something new with another trip into the world of Kassouk." — The Road to Romance