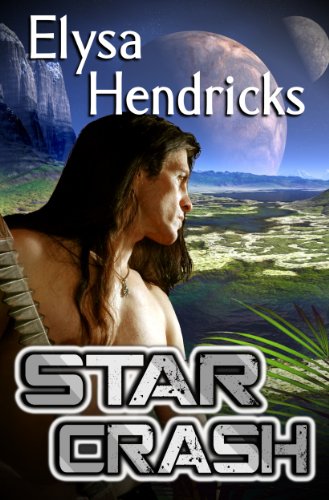 about this book: Have you ever wondered what an animal in a zoo feels like? What it would be like to be caged and treated like livestock by alien creatures? These were the "what if" questions that spurred me to write STAR CRASH. The original PLANET OF THE APES movies, along with the Roddy McDowell Twilight Zone episode "People Are Alike All Over" inspired me to explore this subject. I was also interested in seeing how long I could keep my hero and heroine naked. To find out you'll have to read the book.

My original title was THE HUMAN BREED, which I thought was perfect for the story, but since it's a sci-fi romance my editor and the marketing department thought it sounded too much like a horror or straight science fiction novel. After pitching dozens of titles, including the humorous "Ménage A Fowl," we finally settled on STAR CRASH. It took me awhile, but now I really like this title.

• "Obviously reminiscent of Planet of the Apes, STAR CRASH is an interesting romantic science fiction that is at its best when readers obtain insight into the aliens and how they see humans as being beneath them. Fans who appreciate outer space encounters of the first kind will enjoy Elysa Hendricks' entertaining look at comparative anthropology from ET's perspective."
— Harriet Klausner

• "I loved Cora's independent and dominant personality, even in the face of being captured and kept as livestock. It kinda reminded me of the TV show STAR GATE, which I love, human colony on far away planet, rediscovered hundreds or thousands of years later."
— Krystal Shannan