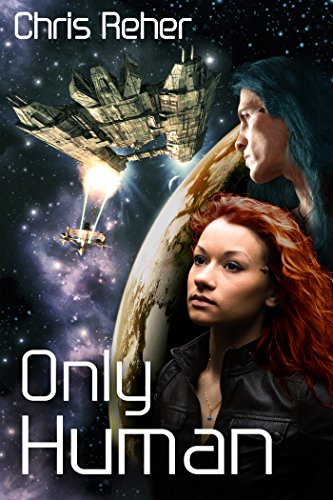 Book: Only Human by Chris Reher

about this book: Only Human is so titled because, in this part of the galaxy, Humans are the minority, having been brought there by their Centauri neighbors to expand the Union Commonwealth of Planets. The resulting rivalry among the species in this sector has given rise to a growing rebel force and to tensions among even closest allies.

Captain Nova Whiteside, a pilot in the Union's Air Command, is teamed with a new commander, a Delphian whose mental abilities sets his race above and apart from Humans. In their pursuit of a ruthless rebel leader and a living weapon in his control, Nova and Tychon's very personal involvement in military matters forces them to go beyond the line of duty.

The relationships between the characters, including the antagonists, drive the story line and ultimately guide their decisions, even if those decisions are not always the most logical for their goals. The need to choose loyalty over duty is, after all, only Human.

I believe it's the characters in this story that have so far had the greatest appeal with the readers. Their enthusiasm so far has led me to begin a sequel.

• "This is just one of those books that sucks you in without you ever realizing it happened."
• "A good, solid read. I can only hope there will be more of this story and the characters soon!"
• "The character development was seamless and the primary characters filled out well."