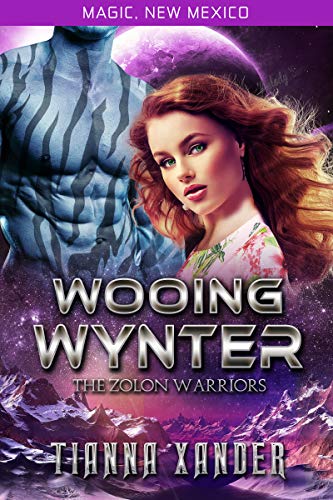 about this book: Shapeshifters don't exist. At least that's what Wynter Larsen keeps telling herself. She's abducted and held captive by a group of insane scientists who force her to undergo their human experiments. At least she's still human. What the others held in the same large cell with her were was anyone's guess. Wynter never could have escaped without their assistance and she owes her freedom to those she left behind. Now, she must find her way to a town called Magic and get help. Her only worry is, the scientists injected her with something and she doesn't know what's happening to her. Lost with a set of orphaned twins, she must find a way to keep the boys safe and return for the shifters she now calls friends.

Geno Brewerigeron is tired of living alone. His sons are nearly grown and soon will no longer need his guidance. Soon, he will have fulfilled his promise to his dying mate. After so many years alone, he aches to join her. Taking on the task of finding a youth bent on telling the world about the people of Magic, was just something to help pass the time. Little did he know that agreeing to find the loose-lipped teen would turn his life upside down.

Can Geno help the gorgeous woman who has given him a new lease on life? And can Wynter come to terms with the fact that her new shifter genes not only give her the ability to change into a wolf, but they have also made her look twenty-five years old again?

Other books by Tianna Xander (more)