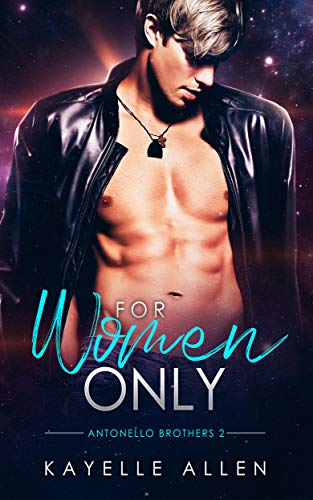 Book: For Women Only - Antonello Brothers 2 - a Scifi Romance by Kayelle Allen

about this book: This sweet science fiction romance has an angst-filled hero whose story will break your heart. The ending will heal it.

Before he was free, Khyff had no say in who he serviced. Now it's his choice. He is for women only. He refuses to touch a cat-like Kin. The aliens devastated his family and reduced him to the worst kind of slavery. So when his brother is attacked and near death and the only way to save him is to seduce a Kin ambassador, Khyff must face his inner demons and once again surrender his will to another.

When Kin Ambassador Mehfawni visits the capitol planet of the Tarthian Empire, she meets the human Khyff, a security expert with the company For Women Only. Fawni expects a fling, but finds love. Upon discovering her own people devastated Khyff's family, she longs to restore all he lost, but some tragedies can never be reversed. Her family demands she cast out the human, for if she keeps Khyff, she must deny her heritage and abdicate her future rule.

When Fawni searches for an alternative, she stumbles upon Khyff's darkest secret, a cover-up that if exposed, will betray her world to its enemies, and bare her family to open shame. But how can she leave him to suffer in the darkness that binds his heart?

His secret truth is her people's darkest lie.

Sweet Science Fiction Romance with a Kick. The Antonello Brothers series continues with For Women Only and begins in At the Mercy of Her Pleasure.