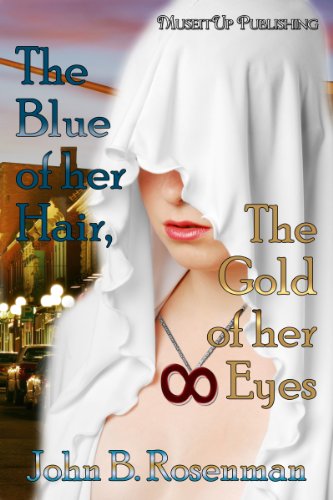 Book: The Blue of her Hair, The Gold of her Eyes by John B. Rosenman

about this book: Lin Holmes of Ladybug Lin Reviews gave The Blue of her Hair, The Gold of her Eyes Five Stars, writing that it was "one of the best Sci-Fi stories I have ever read." The story also won Preditor's and Editor's Reader's Poll Award for Best Science Fiction and Fantasy story.

One of my major interests is transformation in all its possible forms. In the story Rachel Ross lives in a tyrannical State, and she contracts a mysterious and terrible disease shrouded in secrecy. She has contaminated cells in one of her breasts, and a doctor removes it. She is treated a dozen times worse than if she had leprosy. Everybody shuns and fears her, and she becomes an outcast At the best, people merely avoid or leave her, like her husband; at the worst, they scream, shout insults, and throw objects. The State requires her to wear a blood-red figure eight on a metal chain over her heart. It is a symbol of eternity, and it also warns others about her contagious affliction.

Because no one knows for sure what causes the disease and what its true nature and ultimate form is, the fear and terror are all the more intense. More and more people are coming down with the disease, and at a certain point, they just disappear from sight as authorities take them into custody. What is the disease's ultimate outcome? Could civilization itself be headed toward some ultimate and terrible transformation?

Delilah K. Stephens does a smashing job on the cover, which is to highlight the horrific elements in the story. They were a major part of my motivation. Anyone who has ever been seriously sick knows how frightening the experience can be. Now up the ante and factor in a mysterious disease which can change you completely, and you don't have any idea at all what you will ultimately become! All you know is that no one wants a damned thing to do with you. You are all alone, despised, feared, and shunned. And slowly, horribly, you are changing. Changing into what? You are filled with and drowning in the fear of the unknown. You look into the mirror and see a terrible transformation begin. And even worse, the State has locked you up in a place with others as horrible, despised, and yes, as disfigured as yourself.

For anyone who has ever felt as alone and rejected as Rachel Ross, and perhaps come back or is still hoping to come back, this story is for you.