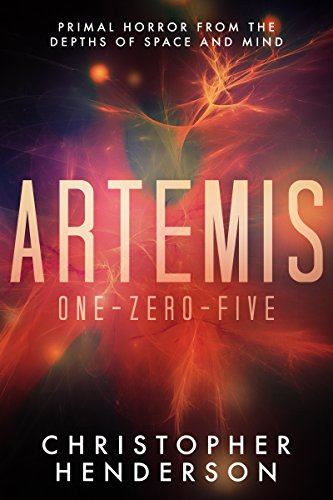 about this book: '... a deft job of developing an ongoing sense of dread and impending terror, all the while making the characters and their reactions rational ... a really well done, character-driven sci-fi/horror story ...' (Kendall Reviews)

'Artemis One-Zero-Five' is a horror/SF novel set in the near future. Some of the action takes place in space, on or in the vicinity of the titular asteroid, while the rest occurs in a London that is suffering the effects of climate change. Sunlit days are a distant memory, the rain is interminable, and the Underground has been abandoned due to flooding.

Hidden inside a run-down building in South Wimbledon, the greatest technological advance in recent years remains a closely guarded secret. Known as the S (for 'Spooky') Link, or simply 'the Link', it is the brainchild of Professor Doreen Grey. A melding of immersive Virtual Reality with quantum science, the Link enables faster-than-light communication in a manner once derided by Einstein as 'spooky action at a distance'. An individual capable of the required act of sustained imagination can, with sufficient training, become a 'slinker', able to embody his or her mind within a remote machine body and to control that body's actions in real time, no matter the distance involved.

Precisely how or why the Link works is still unknown, but a practical use has already been found. Andersleigh Global, a shadowy multinational corporation, is privately funding Doreen's research – in return for what only she can give them.

Under Doreen's guidance, her team of slinkers are using robotic bodies to explore and map the asteroid belt, the absence of radio-lag making this process speedier, more accurate, and more economical than Andersleigh's competitors could ever guess. The data being collected will open up the next great frontier in business: the exploitation of asteroids for the minerals they contain.

The potential for profit is astronomical. But are minerals all that's waiting out there to be discovered?

Doreen's most accomplished team member is Nick Scott. Nick was born to be an explorer. More than anyone else, he feels at home out there, on that asteroid, with the mysterious properties of the Link providing his only, tenuous connection to Earth.

His latest mission is almost safely over, when a momentary lapse of concentration sends him spiralling into the void, and he nearly loses his life.

More than that, he nearly loses his mind.

Unfortunately for everyone, Something finds it.

And now that Something may be somewhere else.

It may be inside the Link.