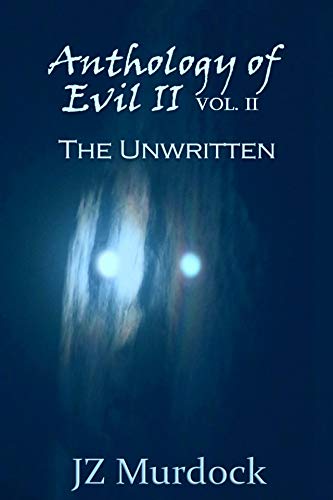 about this book: Anthology of Evil II Vol. II: The Unwritten (& Vol. I) is a sequel to the original Anthology of Evil (2012), collection of JZ Murdock's older and first published works. These two new books contain newer short horror and science fiction stories of both published a unpublished stories.

A man wakes tied to a table in a rustic cabin in the woods. He cannot remember how he got there or who he is. Or who the woman torturing him is. In another universe scientists are wondering what happened to their pan dimensional experiment. In the Universe of "Hell" itself, a hellspawn considers its existence and what that is above it...a doorway? What is going on and how will this all come together and resolve itself in the end?

"The Unwritten", is a story that was started on Wattpad as a novella but grew into a full length book. It is a story based in three very different universes all of which come together in the end. Or as the back cover says, "Three Hells. Three Universes. One Ending." This story was originally an idea of taking three universes and someone bringing them together in the end. It was a fun story to write which is why it went over the length of a novella and why it was offered as a standalone book rather than as an ending novella as was done in the first book, Anthology of Evil (2012).

The cover photos of "Bremerton Moons" are by Gordon Hayes with formatting by JZ Murdock and Marvin Hayes.

There is something in this book and Vol. I for everyone in one's household. Which I thought was a very helpful and useful thing in these pandemic times. Wishing everyone all the best, to stay safe, healthy and entertained!
JZ Murdock
Bremerton, WA - December 2020

Video: Anthology of Evil from Author of the Macabre, JZ Murdock