about this book: 'In Pursuit of Darkness' is a sequel to my book Network of Fear, in what I call the 'Red Tide' series. It follows the further adventures of Roland with his alien paranormal skills, and his friend the forceful and irascible Erik, accompanied of course by Telesphorus their loveable rambunctious cat with his enhanced intelligence.

Once again it required a lot of license and imagination, and as I figured out the plot, Texas became the obvious area in which to base all the action. It had the necessary conditions which fitted well with the disparate climate versions which eventually feature in the story.

A good amount of research was required to acquaint myself with the Texan lifestyle and the great variation of landscape that the state possesses, and to understand and appreciate its full extent and size.

The plot has its beginnings in the mind of a brilliant hedonistic psychopath, who after a freak accident, gains skills which should never fall into the hands of such evil. Warped further by hate, he leaves a ripple of criminal activity in his wake, which causes distress and confusion for the law authorities.

After the red-headed daughter of an influential tycoon is abducted with confusing evidence suggesting that this psychopath could be involved in some way, and after the lack of progress of the usual authorities; Roland and Erik accept an assignment to discover who could have taken her, and dozens of other similar women who vanished in Texas over the past twenty years.

Despite their extraordinary skills, and Roland's talents from his alien genetic inheritance; they are stunned to discover that the ruthless criminal behind it all is a lot more than they had at first believed.

Once again I try to bring the cat and the two main characters alive, with the usual bickering and humorous interaction that can occur between two close friends; sometimes coarse and graphic, but always in line with in what I have heard between workmen and sportsmen. With the cat it was easy, because don't we all know the convoluted nature of the recalcitrant beasts?

'In Pursuit of Darknes's is not a gentle tale, and the men encounter cruelty and violence at almost every turn while death stalks them with a vengeance. Roland's paranormal skills are never reliable in a tight spot, but they can certainly spiral the pair into events that can at times strain their sanity.

The book took me three months to complete, and the cover was chosen to depict a major incident in the story. The title is picked because it aptly follows the theme of the tale. 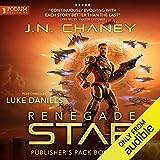