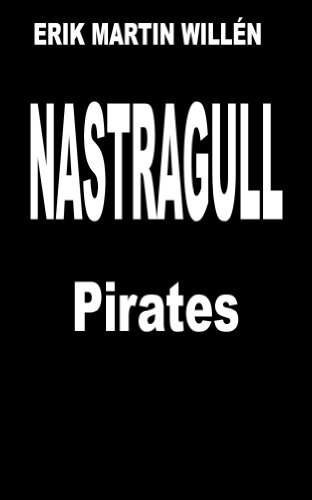 about this book: I have completed an original science fiction novel titled NASTRAGULL: Pirates, the first book in a projected series that combines the non-stop high-tech adventure of Star Wars with the awe-inspiring, complex cultural backdrop of Dune -- with quite a bit of Quentin Tarantino thrown in for good measure. Action-packed and thrilling, the novel includes elements of military SF, traditional space opera, dystopian sci-fi, and the sociological explorations of writers such as Ray Bradbury and Ursula K. LeGuin. At heart, though, it's a love story -- the tale of two literally star-crossed lovers, and their Herculean efforts to move Heaven and Earth (sometimes literally) to find each other again and again as circumstances rip them apart.

This is a story that I've kept coming back to since I was very young. I've already written the second and the third novel and the complete outline for the entire story. There will be 10 books in this series.

I feel the novel has high potential because a short time after it was first published on October 10th 2012 on the AMAZON Hollywood producers contacted me about the film rights to NASTRAGULL. They are interested in developing it into a major science fiction blockbuster. One of their partners is an Academy Award winner who has been involved with films like "2001: A Space Odyssey," "Blade Runner" and "Close Encounters of the Third Kind." They think it has strong box-office appeal and the potential to be another major science fiction blockbuster like "Avatar."

A group of young cadets are heading home after an eight years long training at a military academy for their graduation on the Capital planet Tallas in the Nastasturus Federation. While traveling in space onboard the civilian cargo cruiser the Bright Star they are attacked by pirates and taken prisoners. Something that was never supposed to happen did happen. One of the cadets awakens. The young cadet, Alec Af Hornet, manages to escape with the captain from the Bright Star, Nikko Behl, and together they set out on an adventure to rescue their friends. During Alec's captivity he meets a very young pirate woman, Alexa, and the two of them fall madly in love. It is a forbidden love and it is a love that will bring the universe it's, Third Universal War.

From the opposite side of the universe a creature that has slept for over a thousand years is brought out from her long rest, Marquessa De La Hoof, once the most infamous and genius military commander in the universe, a woman who only has one ultimate goal and greed, to serve her God and to conquer.

The universe - or its proper name spoken on Nadjarish, Nastra - speaks to all of us and everyone hears its sound but no one listens to its words, and the day "you" do listen to the universe and its parents words - or its proper name, Gull - then that is the day you have awakened. Marquessa De La Hoof is one of these creatures and young Alec is the other. But the universe cannot allow more than one listener and therefore the coming of its child - the NastraGull - is next, a child that must set the universal balance right or the outcome will be that there will be no more universe.

• "Nastragull: Part 1 Pirates by Erik Martin Willen is an exciting and thrilling science fiction adventure. From the first page to the last it kept a firm grasp on my attention, making it hard to put down. The characters were easy to identify with and were very believable. " — Larry B. Gray

• "Until I read Nastragull: Pirates, I thought they didn't make decent space opera anymore. Fair warning: prepare for some serious sex scenes that are so hot the pages would probably catch fire if you weren't reading this book on your Kindle! Let me put it this way: just like it says in the description, this is a blockbuster of a book." — Floyd Largent

• "Wow, this is the best sci-fi I've read since Robert A. Heinlein's "Starship Troopers" (which was made into a great movie but missing the best from the original book)." — The Baron

• "too gruesome - Great story but marred by graphic descriptions of violence, torture & rape . It's more like a video game than a book" — goose64