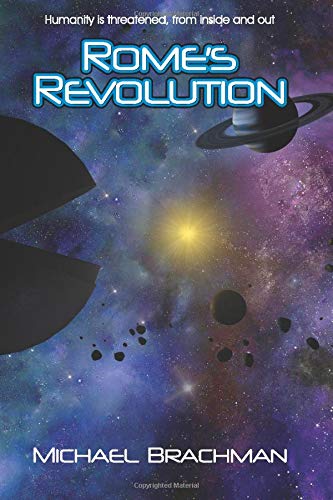 about this book: Rome's Revolution is a meticulously researched, hard sci-fi book about a man from the very near future and a woman from the far future who meet and fall in love.

They come from very different cultures. Rei Bierak is a twenty-something man from the 21st century. Rome is one of the 24-chromosome mind-connected Vuduri of the 35th century. They meet and fall in love which immediately causes Rome to be ejected from the Overmind, the group consciousness. The couple encounters a titanic threat from the outside in the form of a Stareater and from within in the form of a century-old computer trying to engineer the humanity out of mankind. In the end, love conquers all and the couple tries to find domestic bliss on a habitable world orbiting Tau Ceti, called Deucado by the Vuduri. However, their peace is short-lived. Their further struggles are covered in the sequel, The Ark Lords.

I have always been intrigued by the idea of "what if we went to the stars and there were already people there? " That is the basis of this story. In our time, given our understanding of relativity, we can only travel sub-light. Rather than build an expensive spaceship, the mission planners build a very cheap one and spend their money on building expensive freezing chambers, called sarcophagi, that can be opened up to the vacuum of space for centuries at a time. In the case of Rome's Revolution, it is 14 centuries and the star is Tabit, also known as Pi3 Orionis.

I have been working on the book (three books in one, actually) since 1973. It has changed and evolved many times but the one constant was Rei and Rome meeting and even though they come from very different backgrounds, their love is eternal.

Originally, this was three separate books. But the reality of the marketplace forced me to consolidate them into one. The title "Rome's Revolution" was the over-arching theme to all three books.

I have spent years researching the science and physics behind the book. This includes having to figure out not one but two scientifically valid ways of sending people to the stars.

Anyway, if you are looking for serious science in your science fiction, this book is for you, along with its sequel, The Ark Lords.

Other books by Michael Brachman