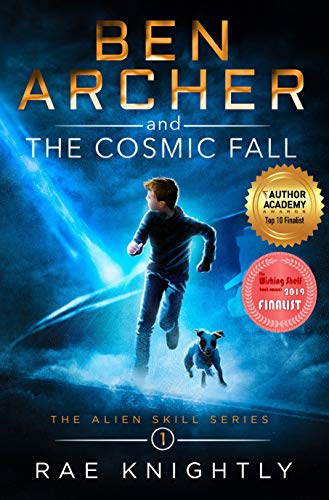 about this book: If you want to be taken on a fast-paced sci-fi adventure, you'll want to read the first book in The Alien Skill Series. This book is for the young-at-heart: middle-graders and up.

Ben Archer is a twelve-year old boy who goes on the run with his mother and and alien man called Mesmo. Mesmo crashed to Earth after a mysterious enemy blew up his spacecraft - an event that Ben witnessed and which the media dubs The Cosmic Fall.

Mesmo's enemy has now infiltrated a government organization and is spurring on the investigation to capture Mesmo. Only, Ben becomes the center of attention when it becomes apparent that something happened to him on the night of The Cosmic Fall.

An alien power was entrusted to Ben without him realizing it, and this power, or skill, is of great importance for Mesmo's mission. Ben's mother struggles with her feelings for the alien, as she realizes things may not be what they seem.

Is he friend or foe? And why did he come to Earth in the first place?