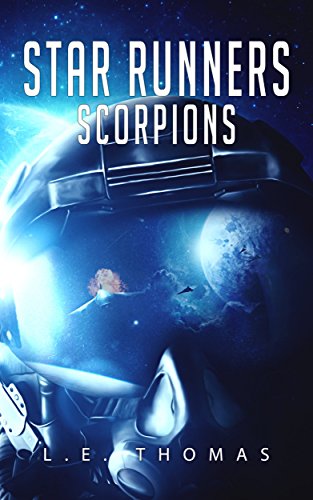 about this book: Star Runners: Scorpions is the fourth book in the Star Runners Universe and continues the tale of Austin Stone, a young man from Earth who has been recruited by the Galactic Legion of Planets to fly Trident space fighters.

The Star Runners Universe is the first series I have ever written. As a result, I had never written a fourth book before. I always had a general plan on how these stories would transpire, and many of the scenes in Scorpions I had planned from the very beginning (so you can imagine how excited I was to write this book!).

"Scorpions" finds Austin dealing with the loss of his first true love, Ryker Zyan while he's joining an elite squadron of Star Runners. While he's been the best natural fighter pilot in his previous assignments, Austin discovers there are other talented Star Runners in the Galactic Legion. He pushes himself harder to train and improve with each passing day.

What happens next is an action-filled romp through the stars, taking Austin and his comrades into fierce battle against an enemy ready to spark an incident to ignite a renewed Galactic War!

I continue to be amazed at the response from readers! I always love hearing from you. I hope the Star Runners Universe continues to entertain and add a little enjoyment to your day. Thanks to all of you and stay frosty!

For now, I'm going back to work on the next book!