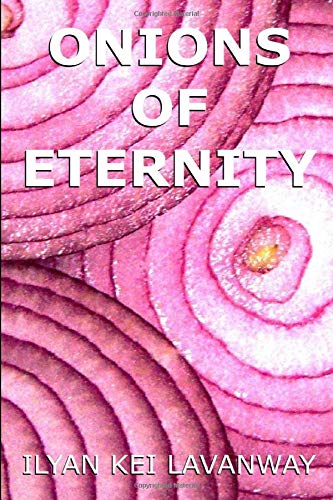 about this book: Onions of Eternity (2017) by Ilyan Kei Lavanway is a brief written work that further explores a few of the concepts described in four other books by the same author. It expounds upon them using a simple visual tool - an onion.

Who would have thought that an understanding of the eternal patterns by which universes are organized and set in motion could be represented by something as simple and commonplace as an onion?

While Hilton and Lavanway agree an many points, the scope of the subject is where their primary differences in thought become apparent.

Hilton posits that the whole of our Heavenly Father's creations is bounded by and contained within a single galaxy, our Milky Way galaxy, and that our Heavenly Father's dwelling place (throne) is positioned near the governing star, Kolob, at the galactic center. Hilton further posits that every other galaxy includes the creations of a different god, and that each god has only one galaxy.

Lavanway respectfully suggests that such a notion is myopic at best. Lavanway offers a far more comprehensive hypothesis, suggesting that our Heavenly Father has a throne at the center of each galaxy, and that there are infinitely many galaxies created by our Heavenly Father.

Lavanway posits that our Heavenly Father has a grand center place, analogous to the core of an onion, from which all of his infinitely many and ever increasing universes are born and set in motion.

The layers of an onion may be thought of as visual representations of concentric and ever expanding universes. Each layer represents a distinct and separate universe that is forever growing, and within which new galaxies are being created and added upon without end. All of it, the whole onion, is created by our Savior, Jesus Christ, under the direction of his Father, our Heavenly Father.

Lavanway suggests that other heavenly fathers (such as our heavenly grandfather, our heavenly great grandfather, our heavenly uncles, our heavenly cousins, and so forth), each have a similar system, like an onion of their own, operating after the same pattern, with infinitely many of their own universes being added upon forever and ever, each universe expanding at an accelerating rate, making room for ever greater numbers of galaxies to be created within each universe. Each galaxy has a throne (divine dwelling place), and a Kolob among fifteen fixed stars or governing bodies situated around that throne and located centrally within each galaxy, all belonging to the god who gave them life (yes, planets, stars, galaxies, and universes are alive. See Intelligent Universe).

Even a mortal man can own and occupy many houses. Why is it a stretch of the imagination to comprehend that our Heavenly Father has infinitely many thrones (divine dwelling places) that he can visit and occupy? Around each of his thrones is organized a galaxy of creations pertaining to that respective throne, all of which belong to him.

Why is it a stretch of the imagination to understand that every other heavenly father out there operates in like manner? Each is bringing to pass his own eternal work and glory that includes adding upon his own infinitely many universes containing infinitely many galaxies. These are eternal patterns. They are as simple as onions.

Lavanway posits that Outer Darkness is the space pushed outward, away from the expansion front of each universe (becoming ever more distant from any given throne of God), and that since outer layers expand faster than inner layers, the space between layers (Gulf of Lazarus) never encroaches upon the layers (universes) themselves.