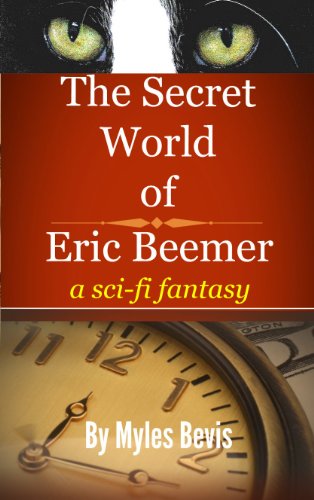 Book: The Secret World Of Eric Beemer by Myles Bevis

about this book: All my life I've toyed with the idea of writing a book. I'd written a play which was performed once and went down exceptionally well in front of a crowd of condescendingly interested parents during my second last year at school. Over the many years since then I've penned business sales courses, quite a few 'how to' guides and the occasional short story, and of course, loads of blog posts. 'The Secret World Of Eric Beemer' was my first attempt at a full length novel. I've always been a fan of sci-fi and fantasy so it was natural to format the book in this field.

It is said a writer can't become an author until his work has been completed and then published. It took me two whole years of procrastination to make the transition from writer to author! I found myself continually revising and rewriting previous chapters whilst neglecting the serious business of actually finishing the story. Realising the error of my actions eventually I got down to serious work, completing the second half in about four months and now I really believe it's quite a smart read.

I really enjoyed writing this novel and have included - for the analytical reader - the occasional 'between the lines' nuance, anagram and 'Irishism'! I have always found Irish folklore incredibly fascinating. The country is very dear to me and most of my formative years were spent there. The theme of 'Eric Beemer' is actually based on Irish folklore.

Suddenly, without warning, a young man is catapulted into a dangerous situation totally out of his control in a place which shouldn't exist. Nothing is like anything he has ever experienced before. Going back is impossible and the naive young person is gratuitously charged with the unenviable task of driving a powerful tyrant from a subjugated land. He has exactly 52 days to carry out the impossible... or die a cold lonely death in a strange land far, far from home...