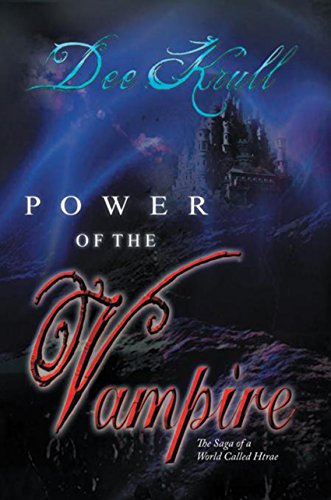 Book: Power of the Vampire - The Saga of a World Called Htrae by Dee Krull

about this book: The saga continues in the second book with Laurel finding herself kidnapped, once again, by a Vampire-hybrid named, Learden. He seduces her and claims her as his mate. Soon she finds herself in the middle of a battle between two very powerful Vampires, who both want her as their mate.

The first book was inspired by my late husband and his love of science fiction and my own love of the paranormal. I also added my own expertise as a clinical hypnotherapist and a love triangle into the mix.

"Power of the Vampire" was solely inspired by the characters I had already created along with a few more that were added to the story. I wrote most of this book during the November Challenge, while I was still in Arizona, packing. I moved between Christmas and New Years, which made finishing it a challenge. I continued to research during all of this, most of which, will be a part of the third book "Rise of the Hybrids."

One of the things that becomes more apparent in this book is Laurel's linage and where 'the power' comes from. Laurel believes the 'power' is a monster that is building inside her, and if unleashed could mean the end of who she is, so she resists against it. The question remains though; is she the one who will bring Htrae back from the abyss of destruction by the king, or will she die at the hands of one she loves.