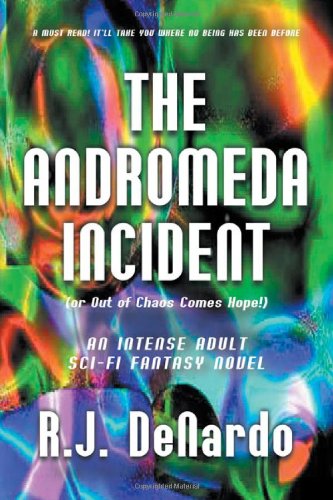 Book: The Andromeda Incident - Out of Chaos Comes Hope! by R.J. DeNardo

about this book: I wrote this book to prove to myself, friends and acquaintances; both supportive and doubting alike, that I could actually finish writing this story, not only for the personal satisfaction of doing so, but also to become a published and recognized author. This, virtual fiction and narrative type of story; is expounded-ly and liberally based on an embellished combination of some of my more fanciful and lucid dreams. 'The Andromeda Incident," is therefore, the culmination of nearly one year of an on-and-off again effort; on my part, to develop it from just an entry in my dream journal, to writing a poem about it, then expanding it into a short story, novella and finally and unbelievably expanding it into a full-length novel. R. J. DeNardo The Author.

This is a story of the disconcerted and mixed-up life, of Emrys Myrddin Calyx, his adventures and misadventures in twelfth and twenty-first centuries. It explicitly describes how he; Emrys is created, at least in this, his present lifetime, Double-sexed. Double-sexed, being a biogenetic mutation that gives those born that way the amazing ability to become either male or female, via a simple telepathic command. The story goes on to describe how Emrys is born to a weak-willed and somewhat frail earthling father and to a black panther-like humanoid, Myrddissian mother. A good portion of the story, concerning Emrys' birth and his growing up, takes place while traveling aboard The Starship Americus. A thrice the speed-of-light, Calyxian blue crystal powered spaceship, which is treacherously headed for the twin, large and pristine planets of Isa and Jera. Two somewhat beautiful and still unspoiled, pastel-colored planets, that are secretively located in a remote region of the Milky Way Galaxy.

The story goes on to expound on Emrys', pleasant and perilous encounters and relationships, with the likes of Myrddissian explorers; an all-powerful Wizard and Alchemist; his Isanian partner, half human children, weak willed mortal father and malicious step-mother. It also elucidates, most detrimentally of all, on his dealings with a vile race, of luminous blue skinned, Crocodilian-like beings, known as The Aurelians. The story continues to explain excitedly how Emrys, desperately attempts to stay one-step ahead of murderous clutches and ceaseless pursuits of the Aurelians, or as referred to in common slang "The Crocks"; and how he does so, by endlessly trekking throughout time, nearby and faraway galaxies and solar systems alike.

Eventually, and thankfully, with the kind help of his Myrddissian mother, Bertrande, her loyal crew and the use of their Myrddissian Time/Space Continuum Transport-Slip device, he can jump through both time and space. Enabling him; therefore, to escape temporarily to the other side of the Milky Way Galaxy. This sometime scary, space altering continuum time jump, has Emerys somehow ending up orbiting the devastated planet Mars, where he ultimately crashes, encounters and has to deal with all sorts of bizarre aliens. All which remarkably includes, Diminutive Grays, Lanky, Bronze Skinned Martians, a Black Metal Robot and a heavenly, rainbow-plumed serpentine alien, known as a Quetzalcoatl. Soon thereafter, after being despicably captured and doped up, Emerys is taken against his will in a Gray s miniature saucer craft, unto the twenty-first century, terribly polluted and dying planet Earth. Where, not too long after arriving, he is forcibly given a mind-altering drug, that may probably, totally wipe out, both his precious and painful memories alike. Most sadly of all though, for Emrys, is that his one current and truly memorable, Double-Sexed identity may be, forever gone. Unbeknownst to him though, this seemingly forcible action is a blessing in disguise, for it enables him to live safely and incognito, among Twenty-First Century Mayan natives. Naively, doing so until his family, friends and cohorts are ready, willing and able to rescue him, before Earth s human caused; cataclysmic destruction finally takes place.

The easy part is writing your novel. Getting it picked-up and published is the hard part. Keep writing fellow authors. Don't always rely on your publisher for marketing and promotion. Get out there yourself and do some of it yourself.