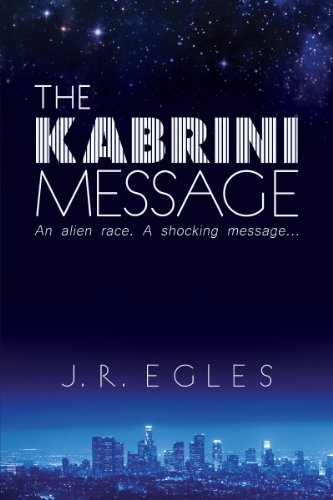 about this book: My name is Marie Carhart and my story is different than most. I am not an author and I did not write this book. My late brother, Joe is the author, J.R. Egles. Joe wrote his book, The Kabrini Message in 1987, but never saw it published.

Late one night in the spring 2011 I was in my attic searching for old family photos for a project for my son's upcoming wedding. I found the photographs—but I also found something else.

I discovered it as I was digging through a box of photos that had come from my mother's house. My mother passed away in 1994, and I must have received the box of photographs and mementos shortly after that—but I had not gone through it until this particular late night adventure. Inside the old box, I came across a large manila envelope, marked in my mother's handwriting: "Joe's Book". The manuscript was dated 1987.

I vaguely remembered, many years earlier, hearing my mother talk about a book that my brother Joe had written. She was typing his hand-written manuscript for him. I don't believe I ever heard Joe speak of it himself; and I had never heard any more of the book until now.

I tossed the envelope aside to bring downstairs, thinking it might make for good summer reading and that was the beginning...

Joe was a brilliant man—quite possibly a genius. However, (and I say this with great love and affection) it seemed to me that he never followed through on anything. When I first found The Kabrini Message, I wasn't sure if he had ever attempted to get it published. I assumed that he had not—or that he probably hadn't tried very hard.

The oldest of my three brothers, Joe was twelve years older than me. The year I started first grade, he started college. Although there was a large age difference, I do have a few vivid memories of growing up with him. I remember Joe building his own telescopes as a teen (not from a kit, but from scratch—grinding the lenses himself, etc.). He was absolutely fascinated with stars and planets, and he spent much of his time at the observatory.

So, as I began reading Joe's book, The Kabrini Message, I was not surprised to find that it was Science Fiction. (What else would Joe write?) Although Sci-Fi is not my usual reading genre, I found that I couldn't put it down – I loved it!

I was amazed and in awe of the imagination it took to create all of those twists and turns and intricacies. Most of all, I loved the quick wit and humor in the dialogue between the characters.

I'm not surprised that my mother took the time to type Joe's entire manuscript. She and Joe had a special relationship; she was his "champion of causes". She believed in him and always encouraged his greatest hopes and dreams. Unfortunately, Joe did not seem to believe in himself enough most of the time.

But Joe had many wonderful qualities, too. He had a fabulous sense of humor and a sharp wit, similar to that of some of the characters in his book. He was funny and extremely intelligent and although he was not someone to openly show affection, I somehow always knew he loved his family very much.

In January 2010, two months after his 60th birthday and with so much talent and ability that it seemed he never really tapped into, my brother Joe passed away.

My mother always recognized Joe's potential, and now I do, too. And although at the time of his passing it appeared that much of his talent never materialized, as it has turned out, that is not true! His talent did materialize…literally…and I found it in my attic!

I also now realize I was wrong when I assumed Joe never followed through on anything. He completed this book. And I recently learned something else from his wife Gwen—soon after Joe wrote the book, they mailed copies of his manuscript to nearly 50 publishers. When interest was not immediately shown, however, Joe stopped pursuing it.

So I decided to take it one step further and make sure The Kabrini Message is finally published, as a gift to both my brother and our mother who always believed in him. I have been "on a mission"…yes, a woman obsessed! But the journey has been a fun, fascinating and educational labor of love and I am thrilled and so very grateful to say that as of January 18, 2013, more than a quarter of a century after it was written, The Kabrini Message is a published novel!

The Kabrini Message is a fun, fast paced book that is technically sci-fi, but with a strong action/adventure crossover. One review that I loved described The Kabrini Message as "Avatar meets Indiana Jones". The "message" is one of our collective consciousness - we are all one. And even though we are a highly intelligent civilization in many ways, until we realize there is no "us and them" but only "we", we are not much less advanced and, in fact, are far more primitive than we would like to believe.

The Kabrini's message of our collective consciousness was way ahead of it's time in 1987, and so it has been waiting there for us until right now, when we needed it most!