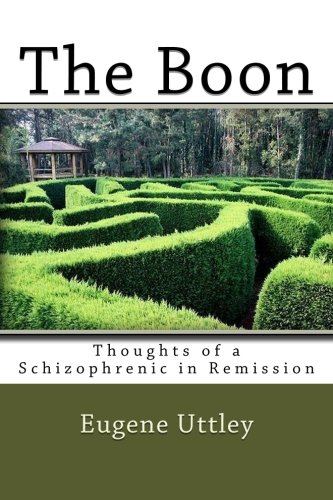 Book: The Boon - Thoughts of a Schizophrenic in Remission by Eugene Uttley

about this book: In 2006, Eugene Uttley was in his fifth year of teaching English as a Second Language in South Korea. At the end of that year, he experienced late onset schizophrenia. Walking away from a good job, a car, and an apartment full of possessions, he followed his voices and delusions into the streets of Seoul, where he became an illegal alien. A month later, he made it back to the USA, but continued in a psychotic break with reality, untreated, for almost an entire year, traveling coast-to-coast, driven by his disturbed mind. Now, five stable years later, he has written two books about coping with schizophrenia. The first is a fairly straightforward memoir, and is currently under consideration for publication by a small press. The second, this book, is more concerned with his recovery and his current thinking about the disorder and what it means to heal psychologically and spiritually and to be whole.

The Boon: Thoughts of a Schizophrenic in Remission draws broadly from thinkers, psychologists, and artists, quoting and commenting on excerpts from a wide array of works and touching on a number of subjects. It also contains original works of poetry, prose, and dialogue written in the years building up to Uttley's psychotic break, with commentary about his mindset and the themes and images he used at that precarious time. Uttley recounts anecdotes from his psychosis, as well as sketches of his current-day life. For all its various sources and types of material, however, this book manages to maintain a brisk, light pace. It is an entertaining as well as an informative read. It provides an intriguing portrait of a mind and soul before, during, and after the ravages of mental illness. It is the authors hope that it will inform readers about schizophrenia, fighting to some extent the oppressive negative stigma attached to the disorder, and that it will inspire and encourage proactive recovery techniques in fellow-sufferers. Uttley provides his contact information in the course of the book and encourages readers to initiate a dialogue with him during or after reading. He feels that an open conversation will be mutually beneficial.