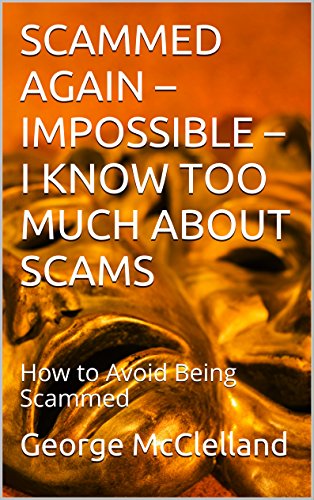 Book: SCAMMED AGAIN - IMPOSSIBLE - I KNOW TOO MUCH ABOUT SCAMS - How to Avoid Being Scammed by George J. McClelland

about this book: Most scammers are very poor people who are just trying to feed their families. Unfortunately they do not care about anyone else or the families of the people they scam. The want to get every penny they can out of anyone, even if it is a person with less than they have.

They are like my wife's younger sister's first husband. Her father was a farmer and the man lived in Kansas City. One day they were talking and began discussing the great depression. My father-in-law made the comment that he was really worried about people who live in large cities because if we had another depression, people who live in large cities would not be able to get enough food. The son-in-law said, "don't worry about me. I have a gun and I will take care of myself. I can come to your farm and take what you have. If you resist, I'll shoot you."

I have a lot of compassion for people who have to struggle to put food on the table. There is no simple answer to feeding the hungry worldwide. It isn't a matter of a lack of available food. We grow enough food to feed the world's hungry. The problem is greed and transportation.

Scammers are desperate and will do everything in their power to take advantage of you. They usually work in packs, like wolves but sometimes go solo. They plan ahead, perhaps better than we do. I'm sure they practice their plans carefully and likely with a partner to make sure they have all their lies in order. They know if one lie doesn't work, they have another one already in their mind.

Remember, they have only one thing in their mind and that is to get everything out of you they can get. Once they realize you can't, or won't, pay their high fees, they will offer to help you by paying some of it or allowing you to pay the remainder after you have whatever they say you are supposed to get. If they have asked for $10,000 they will drop it to $5,000. If they think it is possible to get a little less from you, they will drop the amount they "have to have right now" even more. I had one scammer to drop his required fee all the way down to under $25.00. He must have been really desperate. When they realize they won't be getting any money from you, expect to get an ear full of junk you don't want to hear.

Once you have been scammed successfully, expect the rest of the pack to attack. I am much too gullible for my own good and have been scammed more times than I want to count. They have various ways of getting your information. Some buy your information from other scammers and perhaps off the internet. I know there are a number of websites where you can buy stolen credit card information and they have hit me on that one a number of times, but only one successful and the company that took the bogus information or the credit card company had to swallow the loss.

I get letters from outfits that make it appear that I have won some sweepstakes and I only have to pay a $10 or $20 processing fee. After answering about two I realized it was all a scam, but worded in such a way that they cannot get nailed for postal fraud. They enter you into a sweepstakes or give you the information so you can enter them yourself. There are actually many varieties of scams as you will see in the book.

Lest I be negligent, I must mention that you are being scammed by your government as related in the book and, in my opinion, when your representative votes on legislation against the desires of the majority of the people he represents, it is a scam. Remember, he was elected by promising to vote on your behalf.