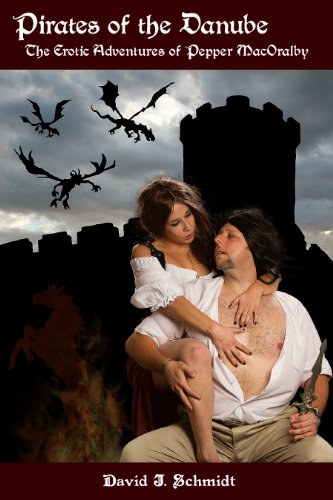 Book: Pirates of the Danube by David J. Schmidt

about this book: You will be on the edge of your well-soiled seat, dear reader, as you enjoy the sensual adventures of Pepper MacOralby, Baron Von Hugenstein, and the young doctor Sigmund Freud.

As Maude Lebowski said of the adult film her stepmother starred in: "The story is ludicrous". Purposefully so. Pirates of the Danube may be the most ridiculous "romance" novel ever created (as indicated by its cover). By combining historical anachronisms, romance clichés, pop culture references and hyperbole, I present a gentle satire of the entire genre. This work of comic farce presents a satire of the entire romance – erotica genre, taking shots at supermarket dime novels, Fabio-emblazoned book covers, and "S & M for housewives" alike.

Readers of "Pirates of the Danube" are swept along from one historical anachronism to the next (Beowulf, Lazarus and Jane Austen's "Mister Darcy" are contemporaries in this world; the young medical student Sigmund Freud makes a cameo appearance). The sexual adventures of our heroes—Pepper MacOralby and Baron Von Hugenstein—take place amidst a mix-matched hodgepodge of historical references, Biblical quotes, literary allusions, and pop song lyrics.

Here's what folks are already saying about this steaming pile of literature I've created:

• "Thank you for contacting the White House. We apologize for not being able to respond to every letter with a personalized response."
— Barack Obama, 44th President of the United States

Video: Dave and the Ladies - A reading of the Pirates of the Danube