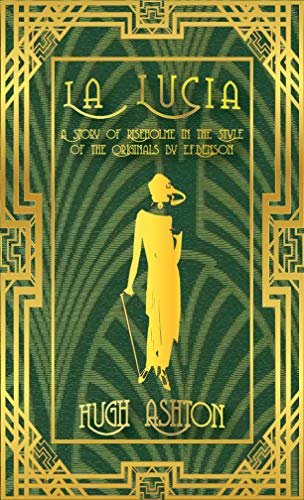 Book: La Lucia - A Story of Riseholme in the Style of the Originals by E.F.Benson by Hugh Ashton

about this book: Writing a prequel is different from writing any other kind of pastiche. This prequel to the Mapp and Lucia books by E.F.Benson looks at life in the quaintly cultural village of Riseholme, ruled over by its doyenne, Emmeline Lucas, known to all as "la Lucia" or simply "Lucia".

Several incidents occurring before the first book in the original series ("Queen Lucia") are described in the Benson books, and "La Lucia" recounts them, recreating the characters and the milieu of the original stories. Miss Elizabeth Mapp, as mentioned in later books, also pays a visit to Riseholme, and makes an impression on Lucia and Georgie.

However, writing a prequel means that the characters and settings must be consistent with the original books to a degree that is not necessary in a sequel, since the incidents and characters have already been described.

This is the third in the series of Mapp and Lucia books by Hugh Ashton, following "Mapp at Fifty" and "Mapp's Return", which have been praised by Luciaphils as being true to the spirit and feel of the originals.