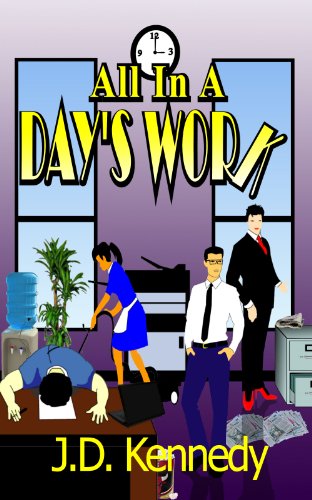 Book: All in A Day's Work by J.D. Kennedy

about this book: In the world of Public Relations getting the word out is essential. However at World Wide Communications most of the juiciest tidbits of information revolve around the employees.

Through the eyes of the Office Manager, we get a glimpse into what goes on behind closed doors at this small but successful New York PR agency, which mirrors society as a whole. Delivered through a tone of humor, this story explores the depths of racism, sexism and the class system. As Regina the office manager mentions, "certain that she makes less than everyone there, maybe less than the college interns why is it that she can perform ten duties in ten minutes and Stanley a senior account executive cannot use a damn fax machine?

Not one of those recent college graduates who become Account Executives can make a cup of coffee, fax a document or get dressed properly without Regina holding their hand and walking them through it. But they get paid the big bucks." A death of one of their own in the office seems to be the least of their problems. A mole watching their every move may cost these employees to lose their jobs, if not their lives.

• Inspiration: A rough day on the job
• Audience: 18 years and older

• Author Biography
Under the pen name of J.D. Kennedy, Lena Williamson releases All In A Day's Work. Born and raised in Brooklyn, Lena Williamson is Founder of Lena Land Books. Lena is an author of fiction, poetry and children books. She is a college graduate with an Associate of Arts degree. Lena is the mother of one child who resides with her in Brooklyn, New York. All books can be purchased at Amazon, Barnes & Noble, From A Writer's POV magazine, Lulu.com, as well as on the author's website.