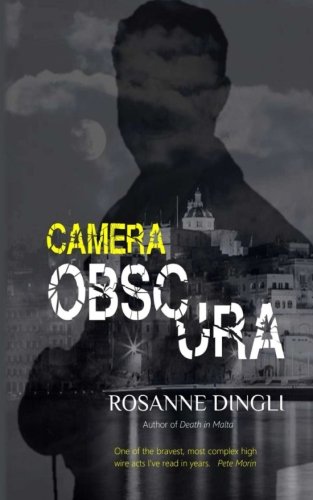 about this book: Camera Obscura was an extremely hard novel to finish. Deciding whether a happy ending or a bitter-sweet one was better took months. Several endings were written and discarded. One ending meant several chapters in the book needed rewriting or adjusting.

It was easy to create Bart Zacharin, a complex flawed photojournalist who reached a 'beige' bit in his life where nothing made sense, nothing was enjoyable, and there was nothing to look forward to. Many men reach such a stage in their thirties. They wonder, "Is this all there is?" Something out of the blue happens, and they are yanked out of their inertia. This happens to Bart – he helps save the life of an extraordinary woman, Minnie, and becomes obsessed with her, to the point of following her all the way to France and Malta from Australia.

There go his relationship, his job, and his friendships.

The chase that ensues involves theft, violence, car chases, and some pretty intimate episodes that confuse Bart. Who is Minnie really, and are her feelings for him anything like the passion and affection he feels for her?

Two people die, and Bart gets beaten up. Stuff goes missing from some important places and Minnie does some very strange things, before Bart realizes he is in too deep. He has alternatives, but he places the choice squarely on Minnie's plate. And what she chooses is how it ends.

• "Camera Obscura is one of the bravest, most complex hire wire acts I've read in years." — Pete Morin, Amazon.com

• "Rosanne Dingli's Camera Obscura is quite simply a wonderful, engrossing read. A mystery with plenty of suspense, action and realism, the story also explores the profound and enduring impact of our paternal relationships; an influence that motivates both the main characters of the book." — Alison Montfort, Amazon.com