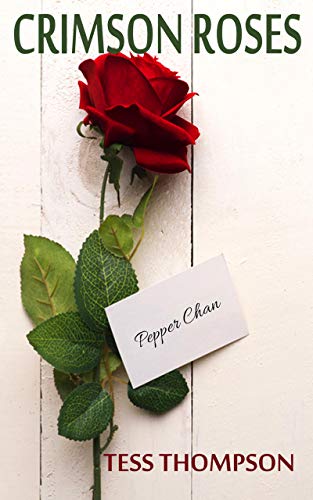 about this book: Tess Thompson is a pen name for Charlene Tess and Judi Thompson who are sisters who write as a team. Our romantic suspense novels have a strong heroine, and the man she loves respects her and treats her well. We were raised by a strong, intelligent, beautiful, and loving mother who taught us to respect ourselves, and we dedicated Crimson Roses to her.

Has the terror from Pepper Chan's past found her again?

When Pepper Chan joined her current veterinary practice in Albuquerque, New Mexico, she tried to leave the scars of her abduction behind her. The last thing Pepper wants to do is relive the terrible ordeal from so many years ago. Her kidnapper was never caught, and Pepper is afraid to trust anyone.

Attorney Roddy Eastman is the brother of Pepper's best friend from high school. He is determined to find out why Dr. Chan wants to avoid him. He tries to convince himself that his drive to seek out answers from her is just his concern for his sister's friend and not something deeper—like his long-standing attraction to her since high school.

The sudden murder of her boyfriend makes it clear that a deranged murderer is taunting Pepper, waiting for the right moment to strike. When Pepper reluctantly reaches out to him, Roddy offers her his help. Together, they must dig into her past to uncover the identity of the stalker before his twisted plans can become a reality.