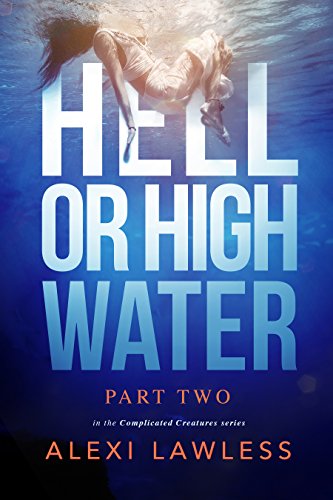 about this book: I'm thrilled to announce the completion of Complicated Creatures Part Two, which is now available for preorder on Amazon. When I first began writing Complicated Creatures Part One, I had clear ideas about what, where, and who I was writing. But this book proved that these characters have a life of their own. With everything from kidnapping and spying to a tangled love triangle, this book truly has something for everyone.

If you love mystery - thriller - suspense - action - romance, you will love Complicated Creatures Part Two. While I will forever be on the NSA watchlist thanks to the in-depth research I did to complete the book, you will LOVE the action. Samantha has been compared to a female James Bond.

The book doesn't waste any time; it jumps right in and hits the ground running.

Sam sat in the room for a minute, collecting her thoughts, trying to calm down and praying that Wes wasn't standing right outside, waiting for her. Her phone rang again in her hand. Relieved, she saw it was Carey, her best friend and business partner. Sam raised the phone to her ear.

"Christ, Bear—where the hell have you been?"

Sam stiffened. "Who is this?"

"We haven't yet been introduced," the man responded casually. "My name is Lucien Lightner. I presume I'm speaking with Samantha Wyatt?"

"Why are you in possession of Carey Nelson's phone?" she asked instead.

"Oh, we ran into each other at the hotel. Had a nice chat. I've been looking forward to meeting you for some time, Ms. Wyatt. Even before you began trying to take what's mine."

Sam waited a measured beat while everything slowed. "What exactly are you referring to, Mr. Lightner?"

"Now, now, Ms. Wyatt. You aren't going to pretend you haven't poached several of my top operatives and key clients in the past few months, are you?" he replied silkily. "Did you think I wouldn't notice?"

"Can't take what you never really had, Mr. Lightner. Especially if they left you willingly," she answered lightly, her mind racing through all the permutations of where this conversation could go.

"We'll have to disagree on that point, Ms. Wyatt," he answered, his blithe tone hardening. "You came after things that belong to me, so I felt it was more than appropriate to reciprocate, given the circumstances." Lightner had Carey. He'd either hurt him or kill him to get to her. Any negotiations would be limited at best.

"Be careful, Mr. Lightner. You may think you're exacting revenge, but you're walking the fine line of declaring war," she told him in a low voice.

"Oh, I'm not concerned," Lightner replied. "My benefit here is actually more peripheral. You declared war, as you put it, a long time ago."