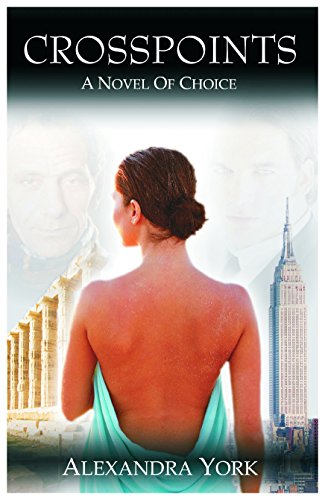 Book: CROSSPOINTS - A Novel of Choice by Alexandra York

about this book: Set primarily in New York's glamorous and ever controversial art world, CROSSPOINTS is a story about free will, dramatizing the many choices offered to various characters in the novel (as they are offered to each of us in real life). The plot revolves around three main characters and focuses in detail on a sculptor's struggle to regain or reject the artistic and idealistic visions of his youth. Leon Skillman (aged thirty-one) is rich and famous, cynical and smart. Handsome and glib to boot, he is the darling of socialites, the press, art critics and gossip columnists. He is an "art star." It is his introduction to Tara Niforous, a Greek-American archeologist (whom he meets after nearly causing her death while shooting sharks in Greek waters, where she is diving in search of ancient treasures), that disrupts his smug existence, bringing his art into conflict because of his unanticipated love for her.

Tara lives for her ancient bronze and marble "gods" but falls irresistibly in love with Leon, who looks and acts like one in the flesh. What she doesn't know is that Leon, on a challenge from his socialite friends, Perry and Blair Gothard, is intent on seducing her merely for the prize of a wager set in order to reduce the growing boredom of their six-week cruise aboard the Gothard's yacht.

Tara's older, Greek employer and head of the Athens Museum, Dimitrios Kokonas, is silently and profoundly in love with Tara, who was previously his protégé and is now his colleague. Intensely romantic but painfully shy about love, he vows to come out into the open at last and fight for her. But she is already into a heated affair with Leon. Will Dimitrios be too late?

Will these three (and several other psychologically colorful characters) honestly examine the validity of their various values and exercise their own free will and reason to chart the direction of their lives, or will they abdicate their future to "other" forces such as emotions, fame, money, duty, convention, hedonism or God? Tara's Greek-born father, Kostas, calls these moments of choice "Crosspoints," as he attempts to teach his sixteen-year old daughter, Kally, and his nineteen-year-old son, Nicky, his lessons about life. Tara returns from Greece to New York--and to Leon--to become embroiled not only in romantic and family conflicts but also an art world foreign and baffling to her.

Art in the novel becomes a metaphor for life, as it is in real life, revealing the soul of an artist as well as the emotional heartbeat of a culture. Art, as the physical manifestation of philosophy, expresses how both individuals and societies can come to "crosspoints" in their developments, where crucial decisions made and pivotal paths followed can determine the future. Characters face crosspoints, art has reached a crosspoint, America and Western civilization stand at a crosspoint.

Settings in Greece, Turkey, Palm Beach and New York provide exciting backgrounds for explorations into archeology, society, money, family, art and love. Characters include the aforementioned socialites, Blair and Perry Gothard (owners of the Harrington Museum in Manhattan and about to open a new wing of contemporary art) and Kronan Hagen, the outwardly cold and austere museum director, who burns with hidden passions for sex, but as a religious fundamentalist, suffers the consequent guilt. Blair's mother, Margaret Harrington Crane (a minor but colorful character) despises the art for the new wing but loves her daughter. Dorina Swing (Nicky's art teacher) fights the battle to keep Nicky on his serious art path, while Leon's influence tempts Nicky to go commercial for fame and money. Leon's art teacher mother (in a parallel to Dorina and Nicky) still waits and hopes for Leon's artistic recovery and return to the talent and vision of his youth that could have made him a great sculptor, not just a famous one. Adria Cass (a famous painter) and Denise Sommers (deputy for the New York Arts Council) are part of Leon's fast-track art world, and Robert Van Varen (art critic of eminence) becomes enchanted, in spite of himself, with the romanticism of Dorina's and Nicky's work and their little band of "cockeyed optimists." Flo Halldon (hard-nosed Madison Avenue art dealer) has "created" Leon and Adria; she creates art stars, and Nicky is her next target.

"Art is sacred," says Tara, the romantic. "Art is what sells," says Leon, the cynic. "Art is the frozen form of man's deepest values," says Dimitrios, the idealist. "Art is high-class sport," says Blair, the socialite. "Art is holy," says Kronan, the devout. "Art is whatever an artist does," says Denise, the relativist. "Art is an entity made an astral hand," says Adria, the mystic.

Contemporary and traditional art forms, ancient Greece and present-day America, free will and determinism, reason and mysticism are explored within the framework of a love triangle that must be resolved between Tara and the two men who love her. Conflicts between and within other characters call upon their value systems, or lack thereof, to determine their own, separate fates at the same time. "Man is his own creator," says Tara. True? Or not? The answer to that question determines for all of us who we each shall become and whether or not we will achieve the inner victory of self-realization.

My potential readers of CROSSPOINTS will be:

I wrote this novel because it has been my observation that although many true tragedies happen in life, most of the problems I examined were personal and professional self-generated problems, meaning that people had no one to blame but themselves. So I wanted to write a story that would inspire readers to evaluate their choices rationally and objectively in order to put them on a path to becoming their own best selves according to their true values of self-realization.

This cover emphasizes the main love triangle and the choices of the heroine--I call the novel a love story for thinking people--but it also indicates deeper, philosophical issues underlying value systems by presenting background images of ancient Greece and present-day America.

I did enormous research for the novel--ten years in all for research and writing, interspersed with other writing projects, producing art exhibits,and running my nonprofit arts foundation: American Renaissance for the Twenty-first Century (ART)--www.ART-21.org--research into contemporary art, archaeology, history, locales, etc.--

To my readers I would say: Be careful of your choices large and small: they create not only your future but also your very most personal, individual, unrepeatable identity.

• ". . .engrossing read, with characters who are strikingly drawn and memorable, and a clever plot. The ideas animating the story are also profound. . ."
— Howard Dickman, The Wall Street Journal

• CROSSPOINTS: A Novel of Choice, by Alexandra York, is the novel we have been waiting for!