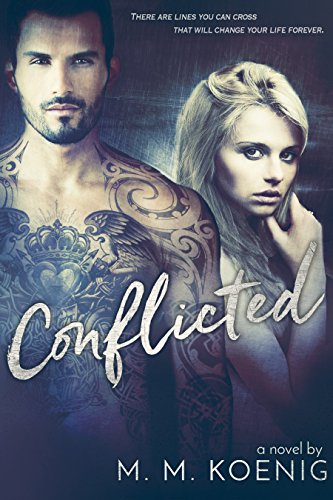 about this book: Mia Ryan had it all - a full scholarship at one of the best universities in the country, editor of the school's newspaper, on track for all her career goals, a great group of friends, and a loving boyfriend. She had everything that she ever dreamed of with all her dreams right within her grasp. Mia never would've thought that someone close to her heart would rip it all away from her.

Broken beyond repair, Mia goes through the motions in life and keeps everyone at arm's length. When an unexpected offer presents itself, she can't help but take it, especially since it promises to restore some of the things she has lost. With a new path in front of her, Mia meets Ethan Fitzgerald, a man that sparks all the feelings she has suppressed in the last year. As much as she wants him, she can't have him without it truly complicating her life in dangerous ways. Regardless, she finds herself drawn to him in ways that she's never experienced and struggles to deny.

Ethan Fitzgerald is a man that gets what he wants in every medium. His commanding demeanor isn't to be challenged by anyone. He has his own goals in mind and can't be bothered with anyone or anything that might interfere with them. To most of the people around him, his closed-off nature makes him an enigma. When Mia Ryan walks through his door, he instantly wants her and refuses to take no for answer. Suspecting there is far more about her than what she's letting on, Ethan is careful in his pursuit of her, but it's more than clear that he won't stop until he has her.

• Why this book should be read and its audience:
This book is a great read if you like a steamy romance story that has plenty of humor, suspense, mystery, and a great group of supporting characters that most people can associate with in college. The target audience for this book is young woman in their early twenties. Due to the strong language and sexual situations, it is targeted for woman over 18. It's also for any readers out there that are at the cusp of finishing college and not entirely sure what to do with their life. I think we all feel that way at one point or another in our early twenties which definitely makes this book a must read. It will either help you realize that you are not alone or it will remind you of some of the thoughts and situations that you went through while in college or those years post high school prior to marriage and babies. Mia's story is definitely relatable in that way. It's also a great read for those woman out there that like a really hot romance story that will get your pulse moving and your lower half a little damp.

• The cover and why it reflects its main characters:
I recently re-released Conflicted with a new cover that is so much better than the originally one I had selected. It provides a window into the characters in such a way that as you read the story you will see it, especially in their choices and words with each other. It really represents Mia and Ethan in a way that still makes me smile when I look at it. The designer did a fantastic job of quietly reflecting their personalities.