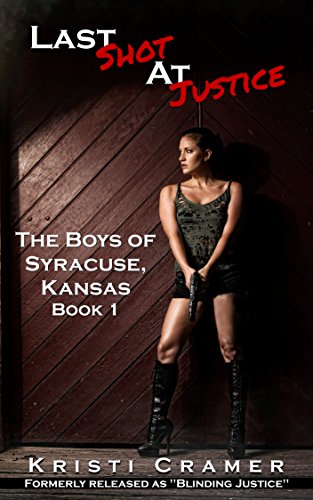 about this book: The opening scene of Blinding Justice was written nearly two decades ago, and when I came across the file for it, the characters hooked me until I had to write their story. I didn't know how the story might end; it was one leap of faith after another that brought me through to the conclusion. As soon as Mitzi solved one problem I threw at her, something new would go wrong. She and Blue always danced just a step ahead of her enemies, but her enemies always seemed to be a step ahead of where she needed to be.

Some elements of the story took me by surprise, especially when research informed me that my original idea must be scrapped. Did you know there is more than one type of hypnosis? When I introduced the hypnotist who makes a brief appearance, I found out that there is a bit more to it that just waving a watch and intoning 'you are getting sleepy.'

Other elements I left in their more stereotypical form. I learned that the typical routine for a newer generation of boxers no longer involves jogging for hours before gym workouts, but who can forget the image of Rocky Balboa jogging up those steps in triumph ... So my boxer has jogged every street in the greater Denver metropolitan area.

I learned what it takes to be a cop on the street in Denver, and gave Mitzi the drive to be one of the youngest ever to earn the rank of Detective. Blue was easy to conjure. I grew up with a man like Blue. My father held up the values of the old cowboy ways, and I married a man who holds many of those same values. Blue is the best of both of them.

Anyone who likes a splash of romance in a fast moving suspenseful story should enjoy Blinding Justice. The attraction between Mitzi and Blue is spicy, but the story doesn't give them much time to act on that attraction. They manage to forge a deep connection while they are running for their lives. Can they save the life of an innocent girl? Can they bring a corrupt cop to justice, despite the accusations against Mitzi?

Can they prove that while Justice may be blind, she is wise enough to see the truth?