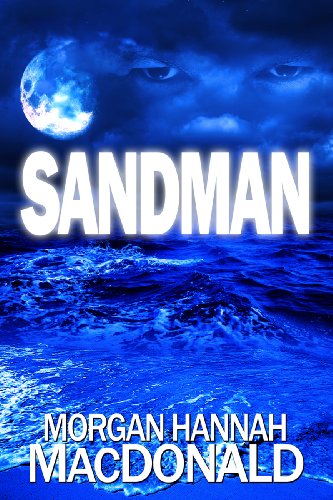 about this book: I have often been asked where the inspiration for SANDMAN came from. Well, truth is stranger than fiction. It was November 3, 1998. I had gone away for the weekend to the mountains with a couple of friends from work. There had been rumors of snow, so we put the TV on immediately to track the storm. The minute the news came on, there was a story of a trucker who had walked into the police station, slapped a plastic bag on the counter and stated; I think you're looking for me. The bag contained the severed breast of a woman.

As the weekend wore on, more information became available. They stated that the man had frequented a Karaoke bar in San Clemente. That perked up my ears. Five years prior, I had dated a guy who ran that Karaoke bar. I might have met this guy! Chilling.

After I got home, there was a message from my best friend. She asked if I had seen the story on the news and wasn't that the guy I'd dated? I laughed. I'd never dated a Wayne. I would have remembered, that was my grandfather's name. Then she told me his full name was Wayne Adam Ford, it hit me. I did date a guy named Adam, but he didn't look anything like the guy on the news.

The Adam I knew was sexy, tall, fit and had a neatly trimmed beard that brought out his gorgeous deep green eyes. It had been the winter of 1993 and he wore flannel shirts with straight legged 501 jeans. I love that lumberjack look! The guy on the news was heavier and balding. Of course, I hadn't seen him in five years and people do change. But I still wasn't convinced. My friend said that Inside Edition was doing a story on him that night.

So at seven o'clock I sat on my couch and waited. They started the segment with the exact same clip the news had showed all weekend. It was a slow motion shot of him entering a court room in an orange jumpsuit. But this time, when he turned to face the camera, I recognized those eyes. I burst into tears. It was him, it was the man I'd dated! My body trembled, then turned numb as I listened to the frightening tale. He was discharged from the marines for psychological reasons in the early eighties. In 1985 he was arrested for the rape and beating of a prostitute, the charges were dropped due to lack of evidence. That's when it occurred to me, he was already on the brink of insanity when I'd known him!

In 1994 he'd met a young girl at that same karaoke bar. They'd married and had a child. After the birth, he started to unravel. He'd become possessive, jealous and asked her to do strange things in the bedroom. She divorced him and took the child to live with her mother. He was refused visitation rights.

That was the catalyst that started his murderous rampage. He started picking up prostitutes and hitch hikers at truck stops along his route. He raped and tortured the girls before he killed them, then sliced off a breast as a souvenir.

The camera panned to a trailer surrounded by woods alongside a river. The picture would have been beautiful and serene if not for all the cops parading in and out carrying evidence. They announced his freezer was full of body parts. It seems that one of his victims had her legs, arms and head amputated by an ax. Her torso was found bobbing in the water by a fisherman. They were still searching the Madd River for her head.

In a moment of hysteria, I remembered how overly dramatic the guy had been. If not for the fact that they'd found all that evidence linking him to those grisly crimes, I would have thought he'd confessed just to get attention. Maybe he did. The authorities didn't know they had a serial killer. He wasn't even a blip on their radar. So the only way he could get his fifteen minutes of fame was to turn himself in. But the joke's on him, fifteen minutes is all he got. After all, have you ever heard of Wayne Adam Ford? It is said that there are approximately 50 serial killers active in the United States at any given time. So if in his sick twisted mind he thought he would be another Ted Bundy, or John Wayne Gacy, he was sorely mistaken.

The final twist to this already disturbing story is that I met Wayne Adam Ford on my birthday November 3, 1993 and he turned himself in on November 3 1998. After this revelation, I didn't trust my instincts regarding men. I didn't go on another date for over ten years. I'm still single to this day. I guess you could say that this has really messed with my mind!

Now I know it's a cliché, but it's true. I never had a clue. The guy I dated was charming, handsome and had lots of friends. We dated only a short time. I questioned his relationship with his ex-girlfriend who was cooking him meals and leaving them in his freezer. He broke up with me because he said I had a suspicious mind. Funny, but I ran into him some months later and we went out to grab a bite to eat. That's when he confessed he had to stop seeing her because he was still in love with her.

Now, when you read SANDMAN, you will find bits and pieces of these things in the story. I borrowed some facts from his case and mixed them up between the suspects so no one would be able to guess the killer's true identity.