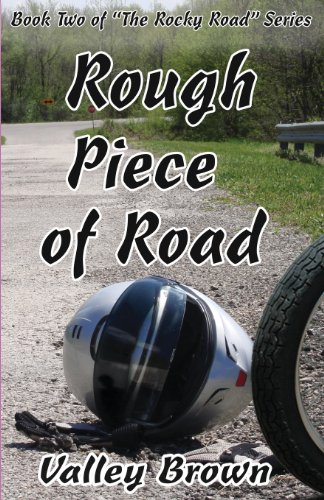 about this book: Strive to Survive and Enjoy the Ride.

That's the creed of my protagonists in Rough Piece of Road. In fact, it runs through my "The Rocky Road" series. Well, that and giving love a second chance. Christine (Chris) Bradford Cassler, widowed too young at the age of 50, is trying to rejuvenate her tired existence. Through no small miracle, she and her first true love find each other after almost 30 years, and the long-buried spark becomes a full-blown volcanic eruption.

During the time these two lovebirds were separated, some pretty nasty stuff happened to them, leaving each with Post Traumatic Stress Disorder (PTSD): Chris from being savagely used by a psychotic boyfriend, and Doug from his tour of duty in Viet Nam (amongst other places).

Their relationship, while problematic in light of their respective histories, is nonetheless filled with deep affection for each other, and humor, a bond that makes their love strong but also makes the rough places in their road to happiness heart-rending.

Chris struggles with self-doubt, avoiding confrontation. Doug is a survivor who shielded himself for so long that he can't quite let anyone else all the way into his world. He adores Chris and would die for her, but he's terrified of losing her if exposure to everything in his past freaks her out.

In Book Two, Rough Piece of Road, the honeymoon is over before it begins when Doug calls Chris by another woman's name in his sleep. Then Chris lands a dream job at the museum and Doug is awarded a big sculpture commission.

Life seems wildly promising until both situations turn deadly. Illicit dealings by Chris's former/late employer involved millions of dollars belonging to the Mob, money that was never found. Local Mafioso Anthony (Tony) Turdanno believes Chris can find it. He's a big donor for the museum, and knows exactly where to find Chris and how to push her buttons. If that isn't bad enough, Tony's devastatingly sexy co-ed daughter is attached to Doug's big commission, and she thinks rugged, handsome Doug should be her new boy-toy. Tony takes threat levels to the extreme while Chris races to save life, love and sanity.

All she has to do is find money she never knew existed and kick a Mob Daughter's butt!