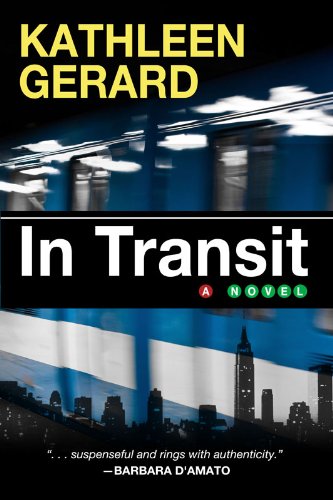 Book: In Transit by Kathleen Gerard

about this book: IN TRANSIT is a novel set in and around the NY-NJ Metro area. The story juxtaposes Rita Del Vecchio, a contemporary, starry-eyed 22 year-old woman with innocent intentions, against the gritty, racially charged backdrop of New York City. When Rita sets out on a quest to become a New York City Police Officer, she meets a man in uniform whom she deems as "the one," but who actually has a dark side that ultimately becomes a menace to Rita's life. Readers can only watch as Rita,
in her naiveté, makes a series of wrong choices that will shatter what she had perceived as an idyllic love story until it becomes haunted in its range and scope.

Gerard wrote IN TRANSIT in her early 20s when she was undergoing years of foot surgeries. A friend whom Gerard had known since high school had, on a whim, taken the New York City Police Exam and shortly thereafter, began working as a NYPD Transit Police Officer. Her friend often visited Gerard en route to her midnight to 8 a.m. shift working in the subways. Knowing an actual cop in the NYPD, Gerard soon realized how often police work is glamorized and sensationalized in books and on TV. Therefore, in Gerard's fictionalized story, she chose to steer away from crafting a police procedural novel, focusing instead on the personal and day-to-day dynamics of those who wear the NYPD uniform.

IN TRANSIT offers deft, perceptive characterizations that present a compelling, post 9-11 portrait that ultimately transcends the boundaries of romance genre fiction. A fast-paced read, IN TRANSIT is rooted in the ordinary lives of NYPD career cops and depicts how their fates are often determined by people who hold secrets as dark and as labyrinth-like as the New York City Subway System.

Gerard writes across literary genres. Her prose has been widely published and anthologized, featured on National Public Radio (NPR) and has been awarded The Perillo Prize, The Eric Hoffer Prose Award and Best New American Voices, all national prizes in literature.

The novel is available for purchase as a hardcover or digitally wherever books are sold.