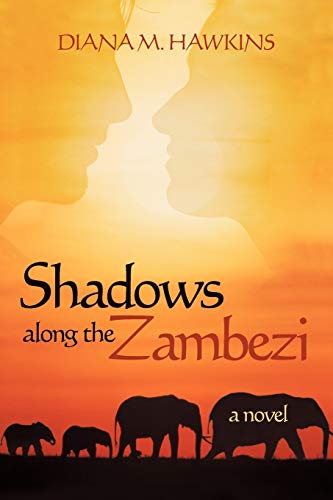 Book: Shadows Along the Zambezi - A Novel by Diana M. Hawkins

about this book: Shadows along the Zambezi is set in 2008, Zimbabwe, as the country's reels from numerous politically inspired terror campaigns, including the often violent, land distribution scheme. Its main characters are Piet van Rooyen, a commercial farmer, turned environmentalist, and Jessica Brennan, an American wildlife biologist, conducting a study of elephants in the eastern Zambezi Valley.

They are joined by Piet's former neighbor, Angus McLaren, another dispossessed farmer who narrowly escapes with his life when his farm is overtaken by so-called veterans of the independence war. Together the trio wins over the local National Parks chief, Hector Kaminjolo and professional hunter, Blair Nisbet, who both step in to champion their cause.

Despite the terror that surrounds them, Jessica and Piet are reminded of the best of human nature as they discover love. Against a backdrop of kidnappings, murders and international intrigue, their healing love story emerges.

Although this is a novel and the main characters are fictitious, much of what takes place in the story is based upon actual events. I grew up in Zimbabwe and was able to accurately describe the story's setting. The book took me three years to research and write, and the hardest part was writing about the violence and the elephants. I cried as I described the attack on a farming family and the massacre of a herd of elephants by ivory poachers. The research involved studying the day-to-day lives of elephants and reading thousands of news accounts of the downfall of Zimbabwe.

• For an objective and professional review of this book, check out the BlueInk review