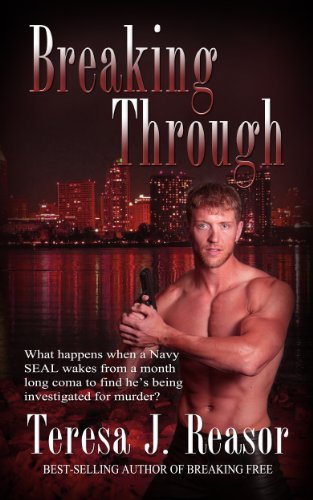 Ensign Brett "Cutter" Weaver has just awakened from a month long coma to find he's being investigated for the murder of a young Iraqi boy. NCIS approaches him about the protection detail. But he has no memory of his last days in Iraq and his SEAL team buddy Derrick Armstrong isn't talking. What can he do to prove his innocence?

Tess Kelly is the only daughter of award winning journalist Ian Kelly. Though she's not interested in covering international stories like her father, she's always wanted more. When Brett Weaver approaches her with the story of the lifetime, she can't say no. But when she becomes involved with Brett everything changes. Will her ambitions prove stronger than her love for this wounded warrior?

Lieutenant Adam "Hawk" Yazzie is Brett's SEAL team CO. He knows Brett is innocent, but when he comes head-to-head with the people investigating his teammate, Hawk finds his own career and freedom hanging in the balance. Can he fight free of the allegations threatening him so he can have a life with the woman he loves?

Zoe Weaver is outraged when she learns both Hawk and her brother are under investigation for saving her life. She's determined to do everything she can to support them. But Zoe has a secret she fears might put Hawk's life at risk. Will she tell him before he deploys to Iraq, or after?

Clara Weaver has been a widow for over twenty years, and though she's dated now and then, she's never felt that special spark with anyone but her husband. Until she runs into Captain Russell Connelly. Will she be brave enough to set aside her age related insecurities and open her heart to another man?

Dr. Russell Connelly's estranged son has just arrived to visit and brought with him tragic news. It isn't the best time to start a new relationship with Clara. And how can Russell ask this woman who's already lost so much, to open her heart to the both of them when one of them may die?

Yassin al-Yussef, a humble Iraqi businessman, has acted as a liaison between business people in Iraq and the American military to bring prosperity to his fellow countrymen. His son Sanjay was delivered home from the base by a protection detail of Navy SEALs and Marines. Or was he?

All my characters must Break Through an internal issue to be happy. And the conflicts they face and have to overcome are both physically and emotionally challenging. I'm just the writer. It's they who will touch your hearts.