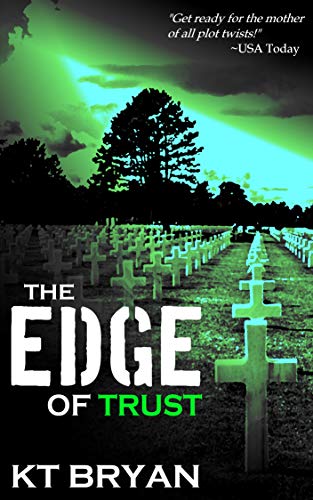 Book: The Edge of Trust by KT Bryan

about this book: When EDGE operative Dillon Caldwell was given a mission to infiltrate the Sanchez Drug Cartel and bring down its head, Rafael Sanchez, Dillon figured it would be a long, grueling year that he might not survive. He had no idea it would be three horrific, gut-churning years, or that the price paid for his efforts would be a nightmare worse than abject failure.

Then, after his cover was blown, he watched in horror as his wife was slain in front of him. His parents were next. And his sister, who died, broken and burning, in his arms.

Dillon, wracked by loss and guilt, is nearly rabid in his hunt for Sanchez, intent on ending his reign of terror. What he finds along the way, though, will change everything Dillon thought he knew to be true. Washed up on a nearby beach, badly beaten and suffering from exposure, is the woman he thought dead for the past twelve months. His wife Sara is alive.

Dillon's stunned relief and joy are short-lived, however, shredded by the razor-sharp fangs of betrayal and kept secrets, scorched by the obvious disdain from a woman who may as well be a stranger. And if that's not enough, not only is Sanchez is still out there, but Dillon can't even trust the people he works for. Not when they kept the truth about his wife from him, not when someone on the inside burned his cover.

He's got a sadistic, murderous drug kingpin after him and someone from his own country betraying him. He's got a wife who is alive, but looks at him with loathing. And he's got the knowledge that, despite all best efforts, he has failed every single person he loved. Struggling with that burden is bad enough, but Dillon's plate isn't yet full. The stakes that he's played with for three years are raised higher still when he finds out that Sanchez has something of his, something Dillon didn't even know existed. And it's a game-changer in every way.

This definitely isn't a book for the faint of heart. Not only is the emotional gamut fairly harsh and unrelenting, but this story doesn't shy away from scenes of physical brutality either.

Men and women alike will enjoy this book. The title comes from one of the main characters, Admiral Edge. This is his team and his series, which each character getting a story of their own.