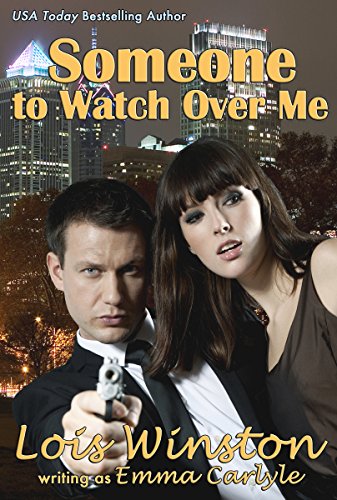 Book: Someone To Watch Over Me by Emma Carlyle

about this book: Dori Johnson is in hiding from the Russian Mafia. Six years ago she committed a series of felonies in order to create new identities for herself and her younger brother and sister. They've kept a low profile, living in fear of their lives ever since.

When Niles York, Dori's boss, offers her the opportunity of a lifetime, she turns down the job, not wanting to risk discovery. However, her brother and sister convince her that after six years, she's unrecognizable, and she can't pass up such an opportunity. Reluctantly, Dori agrees to become the face and spokesperson for York's new retail venture.

Jake Prentiss suspects Dori is hiding a secret, and he's not going to let her jeopardize his friend's business. As a former government operative, he calls in some favors and starts digging into Dori's past. What he finds has him convinced she's out to sabotage York Enterprises. Too bad he's falling for her.

Dori is falling in love with Jake, but she doesn't trust him. He works for the government, and she's a criminal. But then her life is threatened, and she has to make a decision that could either get her killed or put her behind bars for a long time.